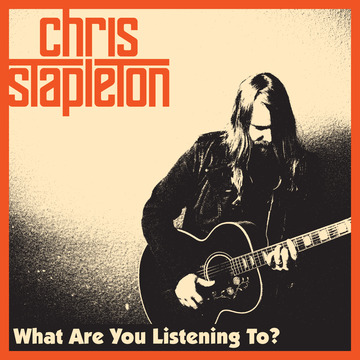 The wait is over for fans of Grammy nominated vocalist and hit songwriter Chris Stapleton as he steps out of the pages of other artist’s liner notes and into the spotlight with the release of his debut country single for Mercury Nashville, “What Are You Listening To?”  The song shipped to radio with an official add date of 7/1 and is available for purchase across all digital platforms on 7/2.

“When Mercury approached me about making a record for them, I was really flattered and humbled, but it also made me do some real soul searching about the kind of record I would want to make,” said Stapleton.  “I’m really happy with the songs we’ve written and how the album is coming together, and I’m excited to finally release the lead single and for what 2013 has in store.  My biggest wish is that people hear these songs and they are moved in some way…that they are reminded of someone they love or someone they lost or even of themselves.”

With over 170 album cuts as a songwriter and one of the most sought after session players and singers in Nashville, artists and critics are already showering praise on Stapleton even prior to single release.

“Without a shadow of a doubt, Chris Stapleton has one of the greatest voices on planet earth.”  Luke Bryan

“There’s nobody on country radio with a voice as powerful and soulful as Chris Stapleton’s.”  Dierks Bentley

Additionally, Music Row’s Robert Oermann describes the debut single as “sublimely soulful” and dubbed Stapleton “the Next Great Vocalist in country music…his powerful singing has always deserved its own spotlight.”

In the past week, Stapleton played his first-ever solo shows at Bonnaroo and CMA Music Festival.  He has also just been invited to join Miranda Lambert and Dierks Bentley during the Fall leg of the Locked and Reloaded Tour, starting Oct. 10 in Lincoln, NE with more shows to be announced soon.

A native of the small town of Staffordsville, KY (pop: 2400) and son of a coal miner, Stapleton made the move to Nashville in 2001 to learn the craft of songwriting and pursue a career in music.  A decade later, he has scored four No. one country hits with songs penned for George Strait, Kenny Chesney, Darius Rucker and Josh Turner, and has racked up over 170 album cuts for artists including Tim McGraw, Brad Paisley and Alan Jackson.  Stapleton has already had a diverse singing career that includes stints as lead vocalist for GRAMMY-nominated bluegrass band The SteelDrivers and lead vocalist in the howling rock and roll band The Jompson Brothers.

One reply on “Chris Stapleton Releases Debut Single “What Are You Listening To?” To Country Radio”