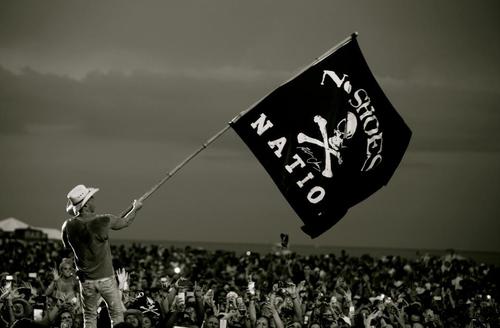 There’s no nation like the No Shoes Nation, built upon friendship, loving life and music that captures who you are. When Great American Country approached Kenny Chesney about developing a long form piece about where he is in his career, he agreed – figuring he could balance the introspection of the songs on his Life On A Rock with his high energy stadium shows, as well as celebrate the people he loves the most: his fans.

Kenny Chesney Presents: No Shoes Nation, a 60-minute documentary produced by long-time collaborator and acclaimed music video director Shaun Silva, premieres Wednesday, June 19, 10:00 p.m./EST on Great American Country. The special goes into Chesney’s world, his touring reality and beyond, providing the most comprehensive picture of the 4-consective Academy of Country Music and 4-time Country Music Association Entertainer of the Year.

“When we were finishing Life On A Rock, which was a collection of songs that were never meant to be part of an actual album, it occurred to me how thin the line between the music, me and my fans really is,” allows the songwriter/superstar. “I realized not only were those songs my fans’ lives, too; but that my fans like their lives with every bit as much heart, as much passion as I do — I wanted a special that showed them how they look to me, too.”

Filmed in Ft. Lauderdale, Key West, Tampa, Jacksonville, St. John and Barbados during rehearsals, in the islands, at club gigs, stadiums shows and all sorts of places in between, Chesney has created a 360 degree picture of his world: the reflective and the combustive, the disciplined and the all-hung-out. He also worked to draw his long time fans into the realm of how precious life is, the places they’ve all been, moments shared and long summer nights of cold drinks, good friends and great music.

Candid interviews, unbridled conversation, it’s a special that aims at the heart of the people who love this music. Or as Chesney says, “When you’ve got people who plan their summer about coming to your show… friends who see each other once a year, coming together with us… That’s when you realize how powerful that connection is. I don’t think we’d be nearly as strong as we are without those kinds of fans! When I start planning the shows, begin the different rehearsals, all I can think about is, ‘How are they gonna like this?’ The new songs, the way we’re doing the lighting, the videos… everything.

“All these years later, they’re still here, still over a million strong and still living that work hard, play harder lifestyle… It’s why I call them ‘The No Shoes Nation;’ why I had flags made up; why I called this special ‘No Shoes Nation.’ Without them, what’s the point?”

The No Shoes Nation Tour, which plays 19 NFL stadiums, as well as several arenas and amphitheaters, is making summer official for another year. Hailed as “the King of the Road” by The Wall Street Journal, Chesney’s deeply soul-searching Life On A Rock marked his 7th Billboard all-genre Top 200 Albums #1 debut. With raves reviews across the country – The Boston Globe, The Chicago Tribune, The Seattle Times, USA Today– as well as 3 pages in Entertainment Weekly, the cover of PEOPLE Country, Billboard and a Friday cover of The Wall Street Journal Arts section, Chesney’s connecting more than ever. Tune in and see why.

Great American Country is again a media sponsor of Chesney’s tour. “We’re thrilled to once again partner with Kenny on the tour and to bring the No Shoes experience to even more fans through this exclusive special,” says GAC GM Sarah Trahern.