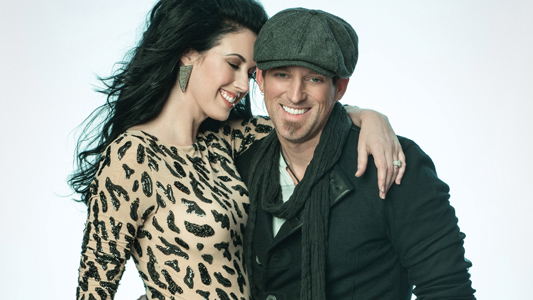 Reigning ACM and CMA “Vocal Duo of the Year” Thompson Square will debut its new single, “Everything I Shouldn’t Be Thinking About,” on The Tonight Show with Jay Leno on Tuesday, May 21st.

The up-tempo and light-heartedly clever song – which The New York Times describes as a “hint of domestic naughtiness” – was co-written by Keifer Thompson who celebrated his 14th wedding anniversary with wife and duo partner Shawna Thompson on May 15.

“Everything I Shouldn’t Be Thinking About” is the second single from the duo’s highly-anticipated sophomore album, Just Feels Good, which earned the duo its highest first week album sales yet.  The lead single from the album – the #1 “If I Didn’t Have You” has earned over 600,000 in sales to-date as well as a 2013 CMT Music Award nomination for “Duo Video of the Year.”

“Everything I Shouldn’t Be Thinking About,” officially impacts Country radio on June 10th and is available at iTunes now HERE.

The Stoney Creek Records’ chart-topping duo is no stranger to The Tonight Show w/ Jay Leno stage. Thompson Square made its national television debut on the program in 2011, performing it’s #1 smash, “Are You Gonna Kiss Me Or Not” which has since gone on to sell over 2 million singles.

On June 4, Thompson Square will release its first fiction novel on Howard Books (a division of Simon & Schuster, Inc.). The book titled “Are You Gonna Kiss Me Or Not,” co-written alongside Travis Thrasher, is a dramatization inspired by Thompson Square’s chart-topping song.

Just last night, Thompson Square dropped by the season finale of NBC’s Celebrity Apprentice All-Stars in support of fellow Country star Trace Adkins as he competed in (and won) the series’ final task. Keifer and Shawna Thompson hand-delivered donations on behalf of themselves as well as Benny Brown and the Broken Bow Music Group, the Academy of Country Music and California Customs in order to support Adkins and his charity, the American Red Cross.

Thompson Square successfully defended its ACM “Vocal Duo of the Year” crown when the husband/wife team took home the award for the 2nd consecutive year last month in Las Vegas. The duo’s second ACM win in a row cemented Thompson Square’s status as a force to be reckoned with in the Country music industry.

The duo is currently touring with Luke Bryan on his Dirt Road Diaries Tour through October 2013.

For more information, tour dates and all the “T2 goins on” visit thompsonsquare.com.