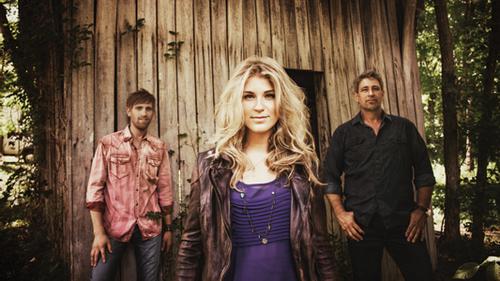 Amid the success of The Henningsens’ dynamic debut single, “American Beautiful,” and with the band currently on the road among the special guests on Brad Paisley’s Beat This Summer Tour presented by Cracker Barrel Old Country Store®, the family trio has announced the release of a self-titled digital EP on May 28.

“With the single doing so well and the Brad tour underway, we really wanted to be able to have something that we could share with fans right now,” remarked lead singer Clara Henningsen.

On their Arista Nashville debut, helmed by four-time GRAMMY®-winning producer Paul Worley (Lady Antebellum, Martina McBride), The Henningsens showcase a sound that is fresh, vibrant, and uniquely their own, with Clara’s expressive and inviting vocals center stage, together with gorgeous family harmonies, compelling songcraft, and vivid storytelling.

Each of the tracks on the four-song EP was co-written by Clara, Aaron, and Brian Henningsen, together with some of Nashville’s top tunesmiths, including Lisa Carver, Don Poythress, Jimmy Yeary, and Brett Beavers, with whom The Henningsens penned “American Beautiful.”

With the release of the EP on May 28, The Henningsens’ previously announced full-length album release will be rescheduled from July 2 to a new date to be announced.

This week, “American Beautiful” is at #18 and #20, respectively, on the Country Aircheck and Billboard country airplay charts.