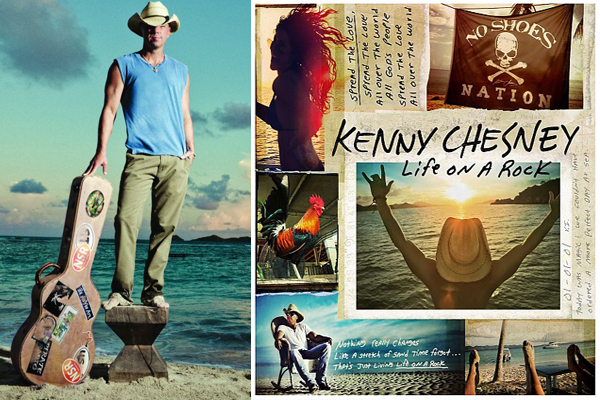 For a man who never intended to make a record, or ever thought this collection of musical sketches would be heard by anybody but his closest friends, Kenny Chesney’s Life On A Rock has hit a nerve with music fans. Though more unplugged and contemplative than what people expect from the 4-time Country Music Association and 4-time Academy of Country Music Entertainer of the Year, Rock debuted at #1 on Billboard’s all-genre Top 200 Albums chart (with sales of 152,800). This marks Kenny’s 7th Top 200 album debut and his 12th consecutive Billboard Top Country Albums chart debut.

“It’s a little surreal,” says the man who’s sold in excess of 30 million albums. “I did this almost as an act of faith, a belief in songwriting and capturing real life. Many of these songs I carried around in a notebook in my backpack – and wrote the music later. Some of them are 6, 7 years old. And when they started to come together as a song cycle, I didn’t know if I was crazy, or if this was the right thing to do.

“The idea that it debuted at #1? Well, that tells me people, music fans care about songwriting and what you share… about looking back and moving on, something more than just partying and having a good time. So, in some ways, this (Top 200 debut) means as much to me or more.”

Certainly, a reflective body of work that boasts only one booming anthem – the Top 5 and climbing “Pirate Flag” – isn’t the obvious move. But for Chesney, in the midst of his No Shoes Nation tour that will hit 19 NFL Stadiums this summer, sometimes doing the right thing as an artist is the right thing.

“People maybe didn’t expect it… and it’s not what ‘the business’ says you should do. But after all the albums and all the hits, I’d like to think my fans are deeper than that. And the No Shoes Nation, which is what I call them, just proved me right!”

The Washington Post concurred, offering, “It’s a bold move, considering that a new crop of country rockers are selling millions of albums modeled on Chesney’s pounding arena rock sound. But, to his credit, Chesney follows his muse and offers up an album that exposes his weathered soul. The result is as appealing as it is surprising,” while The Chicago Tribune opined, “The singer-songwriter turns a loving eye on the spiritual vibe of a life lived off the grid and a group of friends who taught him the cathartic value of living life in the moment” and The Boston Globe said, “Chesney returns to that reflective, often acoustic, place for Life on a Rock… and again hits a high-water mark.”

Indeed, USA Today, which cited “Pirate Flag” as their Song of the Week before it was even released, wrote, “Chesney’s always been able to live in the moment; now, he sounds like he’s appreciating them more than ever.”

Featuring Willie Nelson on the calypso-driven “Coconut Tree” and the Wailers on “Spread The Love,” the proceeds going to the Spread The Love: A Fund for Boston to benefit people needing prosthetics from the Boston Marathon bombings, Life On A Rock takes fans deeper into Chesney’s world – and they’ve responded whole-heartedly.