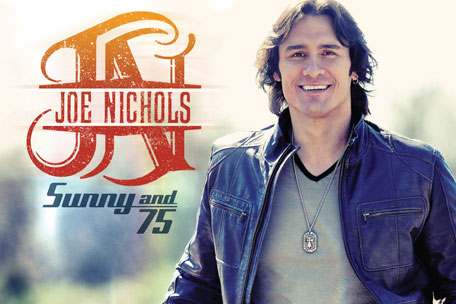 Joe Nichols will have the biggest country radio add week of his career this week with “Sunny and 75,” his lead single for Red Bow Records. This latest hit for Nichols got 52 first week adds, making it not only the biggest add week of his career, but also the second most added song at country radio this week. Nichols was one of the first artists signed to Red Bow Records when it opened in October 2012.

“I have always admired Joe and what he has done in his career. After discussing him with radio, I found Joe has many believers who were just looking for that next big hit from him,” said Renee’ Leymon, VP Promotion, Red Bow Records. “I can’t wait for radio to hear the entire CD as it is chock full of hits.”

“Sunny and 75” was written by Michael Delaney, Paul Jenkins and Jason Sellers and is the lead single from Nichols’ upcoming, as yet untitled CD, set for release this Fall. But prior to that, Nichols fans will be able to see him throughout the summer as he tours the States. The artist will also be a part of CMA Music Festival in Nashville this June, with a performance at Riverstages on June 6th and his annual Fan Club party later that same day, this year taking place at 3rd and Lindsley. For tickets to the party, click HERE.

The single is available now on iTunes.  Get your copy of “Sunny and 75” now by clicking HERE.