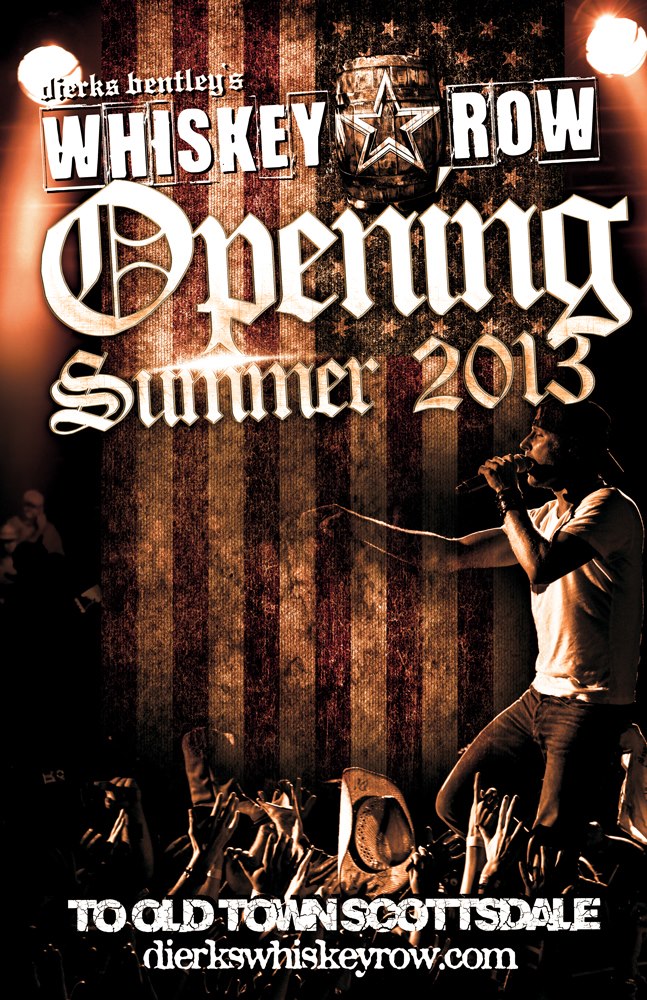 Multi-Platinum singer/songwriter Dierks Bentley will open a bar in his home state of Arizona this summer, with the grand opening of Dierks Bentley’s Whiskey Row set for July 4. Located in the heart of Old Town Scottsdale’s entertainment district, Bentley teamed up with Ryan Hibbert, Mike Troyan and Jon Wright, owners of Riot Hospitality Group (RHG) and operators of El Hefe Super Macho Taqueria for the throwback 1920’s style saloon with a modern country vibe.

“Opening a bar in my hometown is something I’ve always wanted to do,” explains Bentley. “These guys have spent a lot of time and put a lot of thought into really cool details that will make it the perfect place to watch a game or listen to music or just get a few drinks with friends.  I’m looking forward to helping break it in.”

Dierks Bentley’s Whiskey Row will be the first of its kind to enter Scottsdale; it will have an old school country flare with a Scottsdale twist. With warm wood surroundings, the venue features a 360-degree stage and massive 24 ft. TV.  Being the most technologically advanced bar in the state, Whiskey Row boasts a state of the art HDMI video system managed by iPad technology which can control the video and sound from anywhere in the room. As an added benefit to guests, Whiskey Row will offer iPhone and USB charging stations available at the bar. Each premiere booth will feature three different beer taps and never before seen in Arizona, a liquor tap. These hi-tech taps will allow guests to pour their own beer and shots right at the table with no waiting.

The venue will serve a familiar American Gastropub Fare cuisine with a modern twist. All menu items will be made from scratch in house, using organic meats and locally farmed produce. Not only will the menu offer mouth-watering entrees but will feature sweet tooth-curbing desserts such as bourbon vanilla bean ice cream and a signature Arizona honey pecan ice cream topped on a warm apple fritter. The drink menu is just as unique with a new version of a boilermaker, which is a shot of whiskey dropped into a glass of beer. The bar is also set to offer 40 different types of whiskey.  Reservations can be made by visiting the website at www.DierksWhiskeyRow.com and the venue will be located at 4420 N. Saddlebag Trail in Scottsdale, AZ.