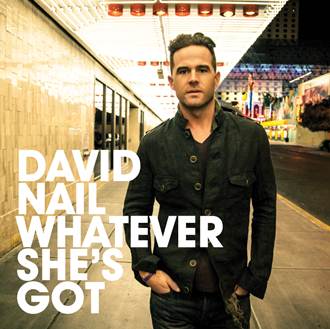 Nail who admits that he has now entered one of the happiest and most peaceful points in his life says “This record for starters, I can’t really say how it’s different without saying that I, myself am different. Therefore the music naturally formed its own life.”

Frank Liddell, who produced “Whatever She’s Got” along with the upcoming unreleased album, agreed with Nail saying “This record is a happy record and reflects to me, where he is in his life.”

Liddell is no stranger to David Nail. He produced Nail’s debut album I’m About To Come Alive, which spawned the top-10 hit “Red Light” and the Grammy-nominated “Turning Home” as well as Nail’s sophomore album, The Sound of a Million Dreams which boasted the No. 1 song “Let It Rain.”

“Whatever She’s Got,” is a song that Nail proudly shares is for his wife, Catherine. Nail immediately was drawn to the song since it reminded him of the first time he met Catherine. The couple met in Nashville and have been married for four years.

“I still to this day don’t know what she has,” Nail says, “but I know that I like it….whatever it is.”