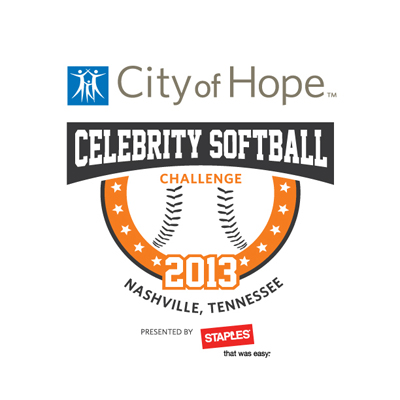 One in three women and one in two men will be diagnosed with cancer in their lifetimes. During the 2013 CMA Music Festival, a star-studded roster of Country Music’s hottest performers and personalities will join forces to help strike out the disease. Stars including Scotty McCreery, Lauren Alaina, Florida Georgia Line, Craig Campbell, Greg Bates, Chuck Wicks and Olympic figure skating champion Scott Hamilton will join cancer survivors to participate in City of Hope’s 23rd annual Celebrity Softball Challenge presented by Staples.

Emceed by Storme Warren, host of GAC’s “Headline Country,” the event will pit longtime rival teams Grand Ole Opry and “After MidNite with Blair Garner” against each other on Saturday, June 8,at 9 a.m. at Greer Stadium. Tickets are now available at ticketmaster.com.

“It’s always good to go out there and get a big win for Country Music in the fight against cancer,” said Pete Fisher, vice president and general manager, Grand Ole Opry. “We’re thankful to City of Hope for its incredible work in cancer research, and know we will live up to the challenge this year. Hey, Team Opry: Spring training starts 10 minutes before game time. Don’t forget the needed gear – uniforms, softballs and Sharpies!”

“We’re so proud to be a part of this special event each year as we help support the amazing work City of Hope is doing to help those with cancer,” said “After MidNite” host Blair Garner. “We encourage Country Music fans to come out to the ballpark and watch their favorite stars as we battle it out for this great cause!”

Presented by Staples, this year’s game marks the 23rd year that Nashville’s power hitters have gone to bat for City of Hope, a leading research and treatment center for cancer, diabetes and other life-threatening diseases. The Celebrity Softball Challenge has raised more than $2 million for City of Hope, enabling scientists to advance research and improve treatments for patients and families everywhere.

Performers Brett Eldredge, Maggie Rose, David Nail, Chase Rice, LoCash Cowboys, Phil Vassar, Krystal Keith and Two Foot Fred will also take to the field for the highly anticipated game. Rounding out the event are City of Hope survivors Hannah Komai, 23, and John Cloer, 12, both of whom will be cheering for their favorite stars.

“I am so excited for this year’s Celebrity Softball Challenge at Nashville; my boyfriend and I are huge Country Music fans!” said Komai, a bone cancer survivor. “It is an honor that City of Hope wants me to share my story at the event after they gave so much to me and my family. After all, they did save my life.”

“Staples is proud to return as the presenting sponsor of the Celebrity Softball Challenge,” said Ron Sargent, Staples chairman and chief executive officer. “We are committed to supporting City of Hope as it continues to make a difference in the lives of patients and works to find a cure for cancer.”

In addition to Staples, this year’s sponsors include PEOPLE Country as presenting media sponsor, The Walking Company as official apparel sponsor, plus Frigidaire, Humana, The City Paper, Dudley Spalding and Louisville Slugger.

“The Nashville community has been a longtime supporter of our mission to rapidly transform innovative research into lifesaving treatments, changing the game for millions of patients and families worldwide,” said Michael A. Friedman, M.D., chief executive officer of City of Hope. “We are grateful to Staples, CMA, celebrity players and fans for their continued generosity that will enable us to discover tomorrow’s cures for cancer, diabetes and other life-threatening diseases.”

For more information about the 23rd annual City of Hope Celebrity Softball Challenge presented by Staples, visit cityofhope.org/softball. To purchase tickets to the most fun-filled game in town, visit its Ticketmaster page. All ticket sales benefit City of Hope.