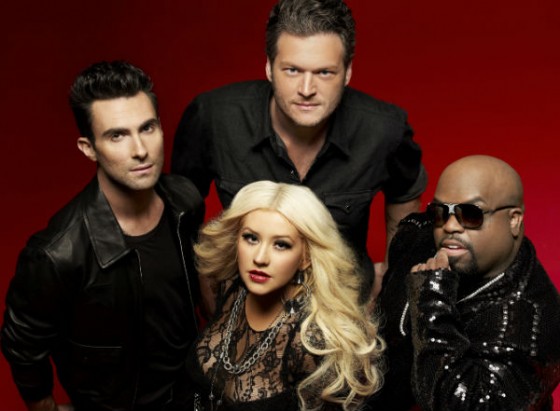 Illustrating the continuity between its original and current coaches lineup, “The Voice” will bring back Christina Aguilera, CeeLo Green, Adam Levine and Blake Shelton for its fifth cycle in fall and will pair Levine and Shelton with Shakira and Usher for the sixth cycle in midseason.  Carson Daly will return as host for both cycles.

The announcement was made by Paul Telegdy, President of Alternative and Late Night Programming, NBC Entertainment.

“We locked in a plan several months ago to have the outstanding Christina Aguilera and CeeLo Green rejoin Blake and Adam for cycle 5, and we’re pleased to announce that the original four coaches are going to be back together in the fall,” said Telegdy. “They’re the reason this show was launched so strong for the first three cycles and we owe them a debt of gratitude. And after careful consideration of everyone’s schedules for next spring, we are excited to be returning the current cycle of coaches — Shakira and Usher along with Blake and Adam — for cycle 6, which will premiere after the Winter Olympics.”

“We’re very fortunate to have these six incredible artists to weave in and out of the show as their performing and recording schedules permit,” said NBC Entertainment Chairman Robert Greenblatt. “The show has taken off largely due to the rapport and commitment of these great coaches, in addition to the expert hosting of Carson Daly.”

“I am so thrilled that our Voice family has grown from four coaches to six,” said executive producer Mark Burnett. “This show thrives on the ability of our coaches to continue to balance their enormous music careers with working on The Voice to coach some of the best undiscovered talent in America. The coaching panel of Christina, CeeLo, Adam and Blake was at the heart of this show in its first three seasons and we are so lucky to have found equal success with Shakira and Usher in season four.  Our best seasons are ahead of us.”

Shelton, Levine, Green and Aguilera were the coaches for the first three seasons of “The Voice,” and helped establish the musical competition series as a dominant ratings force. Shakira and Usher have only built on that, continuing to make “The Voice” a Nielsen hit.

Shakira and Usher will reteam with Shelton and Levine in midseason. The show will receive plenty of promotional pop during NBC’s coverage of the February Winter Olympics from Sochi, Russia.

“To a purist, Mr. Shelton is a savvy student of tradition. To a would-be outlaw, he’s forever adding a wink. He’s a star who is only as explicit as you want him to be,” said Jon Caramanica, The New York Times. Shelton’s passion for country music and his commitment to mentoring his teammates from “The Voice” make him an incredible ambassador for country music. Shelton kicks off his “Ten Times Crazier Tour” July 19 in Virginia Beach, Va. For additional dates, visit: www.BlakeShelton.com.

The show’s innovative format features four stages of competition: the first begins with the blind audition, then the battle round, the brand new knockouts and finally, the live performance shows.