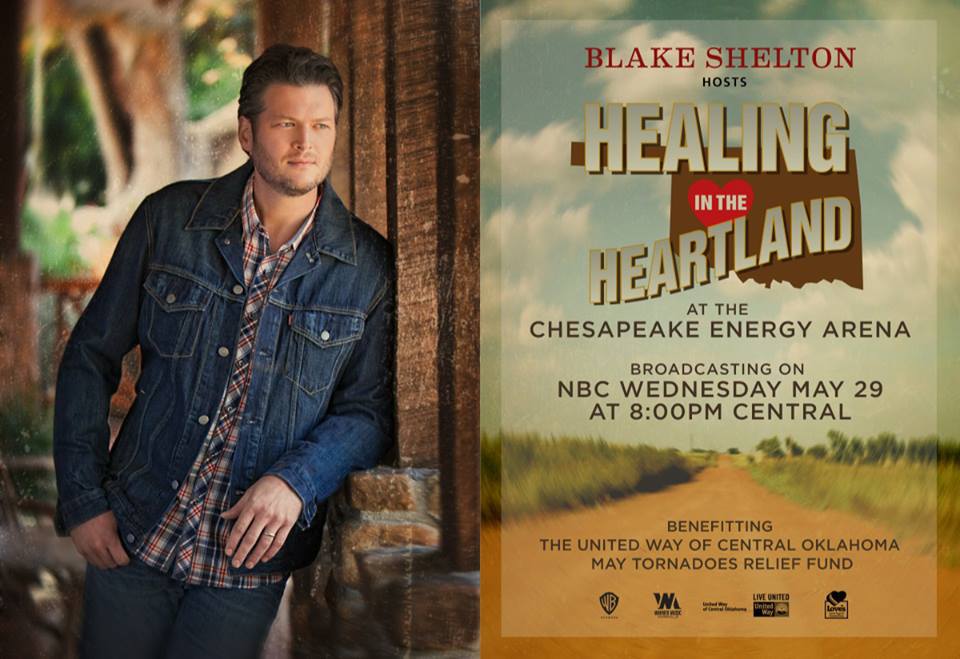 Blake Shelton has organized and will headline the telethon “Healing in the Heartland: Relief Benefit Concert” on May 29, to take place at Chesapeake Energy Arena in Oklahoma City.

UPDATE: Luke Bryan, Rascal Flatts, and Ryan Tedder of One Republic have been added to the lineup for the “Healing in the Heartland: Relief Benefit Concert.”  Both Tedder and Joe Don Rooney of Rascal Flatts have strong Oklahoma roots.

UPDATE II: Usher and Darius Rucker have been added to the lineup of performers set to hit the stage for the May 29 “Healing in the Heartland: Relief Benefit Concert” organized and headlined by Blake Shelton.

Tickets for the concert went on sale Saturday morning and sold out in under five minutes. The event will take place May 29 at Chesapeake Energy Arena in Oklahoma City.

The concert will be televised live at 9 p.m. ET/PT on NBC. It will also air on cable networks Style, G4, Bravo, E! and CMT on either a live or delayed basis.

UPDATE III: At 8 p.m., all 84 Country format stations owned by Cumulus will air a one-hour fundraising special hosted by Country star Kix Brooks and co-hosted by KSCS/Dallas personality Hawkeye – broadcasting live from backstage at the “Healing In The Heartland: Relief Benefit Concert” that airs on those stations at 9 p.m.

“Everyone has their way to help, and mine as an entertainer is to perform to help raise money and awareness for this tragedy,” Shelton said. “This is why I want to do this special and especially hold it in Oklahoma City, which is near ground zero.”

Born and raised in Oklahoma and currently residing in the city of Tishomingo, the recent tragedy that struck the state this week hit close to home for Shelton. The one way the country singer knew he could help immediately would be through the “Healing in the Heartland: Relief Benefit Concert” aiding the United Way of Central Oklahoma.

This isn’t the first time Shelton has reached out to those in the wake of tragedy in Oklahoma. In 2011, Shelton and long-time friend Reba went back home to Oklahoma to host the “Tornado Relief Concerts” for victims affected by the Atoka County tornadoes. The two-sold out concerts, which featured special guests and over two hours of entertainment, raised $500,000 for the Oklahoma victims.

Tickets will go on sale at 10 a.m. CT on May 25. Tickets are $25, with a limit of eight per person. Tickets can be purchased at the Chesapeake Energy Arena box office, all Ticketmaster locations, by phone at (800) 745-3000 and online at TicketMaster.com.

One reply on “Blake Shelton Organizes ‘Healing In The Heartland: Relief Benefit Concert’”