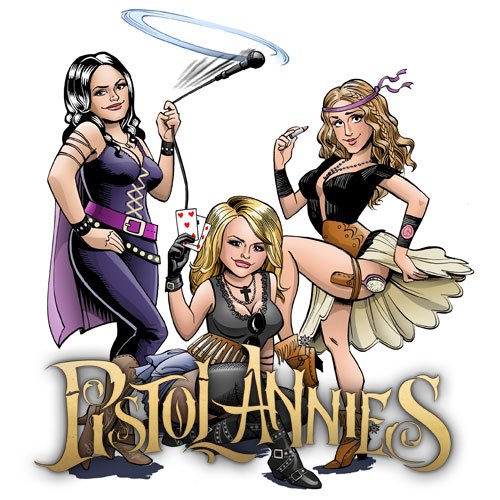 Pistol Annies are all about great music and great fun and thought a caper, would be a great way to celebrate the release of their sophomore album, Annie Up which comes out May 7. The adventure began April 17 when the Pistol Annies realized their gear, merchandise and new music had been stolen by Cassius Banks, the mysterious CEO of Vanilla Records, and his band The One Tones. Fans were invited to join the adventure at PistolAnnies.com by following the story of The Case Of The Stolen Gear as it unfolded.

Now, halfway through the journey, fans have recovered a custom Gibson guitar in Louisville, signed lyrics found in Austin, and a one-of-a-kind logo emblazoned leather jacket in Atlanta, among other things.  As items are found, exclusive merch items and new content are unlocked, including never before seen photos, video, acoustic tracks, lyrics and more.  The fan that finds each of the items in the adventure, wins a trip to a Pistol Annies Secret Show.

Fans across the country can enter to win the same flyaway trip by connecting via Facebook, Twitter or e-mail HERE for the chance at one of three flyaway trips to the secret show.  Daily recaps are available at pistolannies.com/news and the exclusive, some one-of-a-kind, merch offers can be found HERE. Annie Up and join the adventure today.

Fans can pre-order Annie Up now on iTunes HERE.