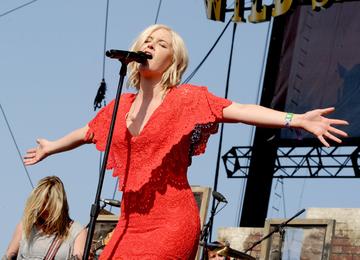 RPM Entertainment’s sassy singer/songwriter Maggie Rose had a jam-packed weekend on the west coast with a performance for Yahoo Music!, opening for Rodney Adkins at Club Nokia, and the kick-off performance slot for Stagecoach 2013, all as her new hit single, “Better,” jumped four spots on the charts breaking through the Top 40 at #38 on Mediabase.

Overcoming extreme temperatures, Maggie Rose kicked off the Stagecoach 2013 country music festival performing hits from her recently released debut album Cut To Impress. Rose relished the enthusiastic crowd as they sang along to her debut single “I Ain’t Your Mama,” as well as her current Top 40 single “Better.”

The Press-Enterprise named Rose the “Best Up-and-Coming Act” at Stagecoach 2013, describing her set as “lively” with a band that “packed a punch.” Rollingstone.com was on hand to take a quick shot of the country newcomer backstage in her spicy red mini-dress. View HERE.

Maggie Rose is currently touring across the country. For an up-to-date performance schedule, visit www.maggierosemusic.com.