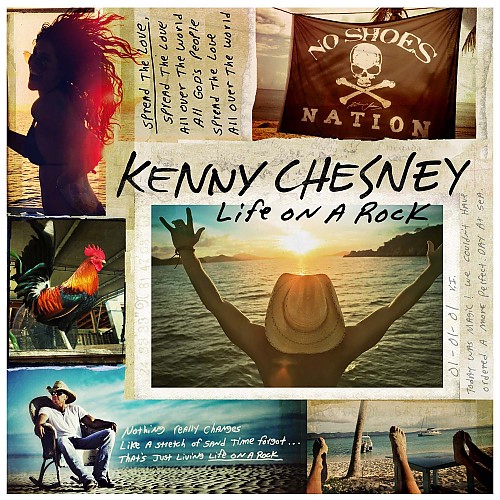 Kenny Chesney’s highly anticipated new album Life On A Rock is now available to stream in its entirety exclusively on the iTunes Store (iTunes.com/KennyChesney).  The album stream, which is already being called “the most personal and invested album of his career” will remain available until release day on April 30. Fans who pre-order the new album will instantly receive a download of “Lindy,” the first song written for the project.

“When I wrote these songs, it was to capture a time and a place, friends, memories and the way it all felt,” Chesney says of the collection that features guest appearances from Willie Nelson and the Wailers Band. “But the more you live, the more you realize how precious those things are… and now, iTunes is helping me share these stories, these people, these songs with music lovers everywhere.”

“Pirate Flag,” the project’s lead single, marked Chesney’s 8th Top 25 debut – the only artist in Billboard history to achieve that feat. – It hit the Top 10 in just 7 weeks, and is currently climbing the country charts.

Chesney’s sold over 30 million albums, including the quintuple platinum Country Music Association Album of the Year When The Sun Goes Down, the quadruple platinum No Shoes, No Shirt, No Problems and Greatest Hits, as well as the triple platinum The Road & The Radio.

He’s won four consecutive Academy of Country Music and four Country Music Association Entertainer of the Year Awards. Other awards include the fan-voted American Music Awards Favorite Artist and the Academy of Country Music’s Top Male Vocalist. Among his 24 #1s are “There Goes My Life,”  “The Boys of Fall,” “Somewhere With You,” “Beer In Mexico,” “Out Last Night,” You & Tequila” with Grace Potter and the ACM Single of the Year “The Good Stuff.” Known for his high energy live shows, he in the midst of his current No Shoes Nation Tour, which includes 19 stadiums.