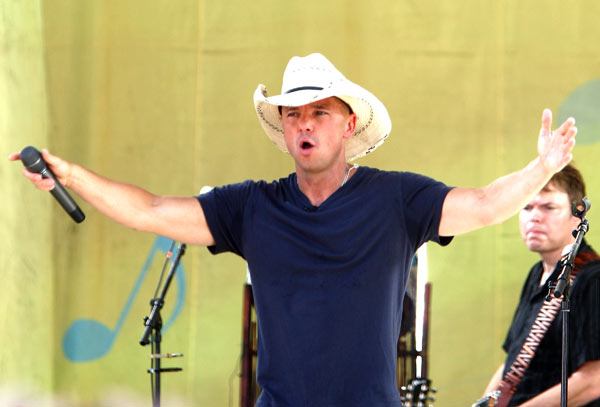 As “Pirate Flag” crests the Top 5, Kenny Chesney makes his way to New York City to play his new music for all kinds of people. But as he’s done so many times before, look for the man with the 24 #1s to wake up and say “Good Morning, America” on April 30. Slated to perform his latest single on ABC’s top-rated morning show, Chesney is ready to start sharing his reflective Life On A Rock with the fans.

“Life On A Rock came from such unlikely places,” says the high impact singer/songwriter. “Literally some of these songs were carried around in my backpack or my notebooks, just written to remember a moment… I never thought anybody except my friends would ever hear them. So now, to be here, it’s both exciting and a little a scary.”

For Chesney, whose been playing the storied morning show for a decade now, it’s not tv jitters he’s worried about. It’s the idea of opening one’s life, one’s moments and friends up to the world at large. While “Pirate Flag,” the pumping anthem of rebellion right where you are, is more of what people expect from the man who’s sold more than a million tickets on each of his past ten tours, the rest of album broadens out to embrace Calypso, reggae, contemplative, Van Morrison and classic songwriter motifs.

The curious can get a taste on “Late Night With Jimmy Fallon” later that same evening. Chesney will not only play “Pirate Flag” with his guys, but he’ll join the Roots for “Spread the Love,” the song Chesney helped the Wailers’ finish writing.

“I think people are so open to all kinds of music,” Chesney says. “People who watch Jimmy Fallon don’t just like one kind of music… and somebody like me loves Bob Marley as much as Willie Nelson. I think that’s one of the things about getting these songs out there, it’s about getting beyond genre and making music: something Jimmy Fallon and the Roots do, too.”

With USA Today already naming “Pirate Flag” its Song of the Week, anticipation for Life On A Rock is high. Look for features in Entertainment Weekly, People, The Chicago Tribune and “CBS Sunday Morning,” while the No Shoes Nation Tour – a collection of arenas, amphitheaters and 19 Stadiums – continues hitting on all cylinders.

“That’s the greatest part of music: it brings people together. Whether it was leading me to friends, creating what has evolved into the No Shoes Nation or brought people as diverse as Family Man (Aston Barrett), Grace Potter and Steve Miller into my life,” Chesney says. “It’s time to make things a little more personal, and I can’t wait to kick off the new music on ‘Good Morning America’ next week.”