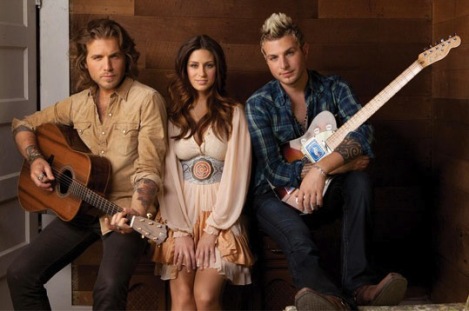 Country music trio Gloriana will perform their current single “Can’t Shake You” on The Tonight Show with Jay Leno Wednesday, April 3rd. Fans can tune into NBC at 11:35pm EST/10:35pm CST (check local listings) to catch Glorianas performance of the single, which is Top 25 and climbing. Gloriana is currently on the road in support of their critically acclaimed second studio album A Thousand Miles Left Behind performing headlining shows across the country.

Glorianas performance on Leno will kick off a whirlwind weekend for the band. The following day they are headed to Napa Valley, CA to perform at the private Live In The Vineyard music festival which will also have performances by multi-platinum selling groups New Kids On The Block, Goo Goo Dolls, and Plain White Ts, among others. On April 5th the band will perform for the military and their families stationed at the Marine Corps Base Camp Pendleton.

The event, hosted by comic book icon Stan Lee, will benefit the Marine Corps Community Service (MCCS), which is responsible for all morale, welfare, and recreation programs for the Marines Corps. On April 7th Gloriana will perform at the Brides first-ever BRIDES LIVE WEDDING event, where everythingfrom the winning couple to the color scheme to the first-dance song, performed by Gloriana is being decided upon by Facebook likes. Fans can watch it all come together and will get the chance to see Gloriana perform their Gold certified single “(Kissed You) Good Night” for the couples first dance as husband and wife at the St. Regis Monarch Beach in Dana Point, CA, by tuning in to the live-streamed wedding on April 7th at 4pm PST.

Gloriana, who can also be seen performing their single ”Can’t Shake You” on May 7th during the season finale of the hit CW show Hart of Dixie, celebrated career success with their previous single ”(Kissed You) Good Night” as the most played single by a group at Country Radio in 2012. The trio released their second studio album A Thousand Miles Left Behind in July and it debuted at #2 on the Billboard Country Album Chart. For more information on the rising country trio and to get up to date tour information fans can go to Gloriana.com.