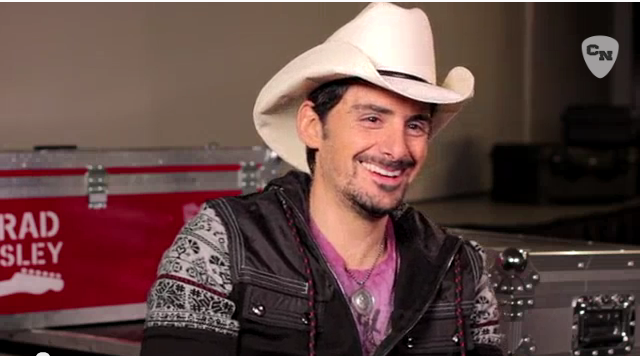 Country Now, the first original country music and lifestyle-dedicated YouTube channel, today announced the debut of its newest original program, On The Record. Superstar Brad Paisley will inaugurate the series with the six-week run of Paisley: On The Record, premiering today at 12:00 PM EST/9:00 AM PST, online HERE.

Each 3-5 minute episode offers an inside look at the making of Paisley’s new album, Wheelhouse, featuring exclusive interviews, never-before-seen footage, and Paisley’s intimate insight as a first-time producer as he shares the development of several songs as they were recorded.

The show producers, Greenlight Media & Marketing, in association with Spring Valley Productions, shot their interviews with Paisley at Nashville’s Bridgestone Arena during rehearsals for his upcoming “Beat This Summer Tour presented by Cracker Barrel Old Country Store®.” Additional behind-the-scenes footage from his farmhouse studio was provided by Paisley.

Each new episode of Paisley: On The Record will debut on Thursdays at 12:00 PM EST/9:00 AM PST. All episodes will also be available on demand.

“Brad (Paisley)’s On The Record is the first in an original series that is intended to take fans inside the making of the most important albums of a superstar artist’s career,” said Dominic Sandifer, President Country Now/Greenlight Media & Marketing, LLC. “It’s our obligation to provide country music and culture lovers with compelling, original, informative programming that they cannot get from any other individual source. Brad and ‘Wheelhouse’ provide us with the perfect kickoff for what we believe will be one of our most successful series’ over the coming years.”

OMC! (Oh My Country!), hosted by Laura Bell Bundy, Brooke and Tiffany Engen and Hugh Howser, airs every other Wednesday, dishes out style dos and donts from the red carpet and the closet.

Country Download, airs every Friday and presents the latest country music news, reviews and recommendations from some of the world’s most influential and sought after journalists.

I Love My Country is a weekly, animated, comedy series produced by Revolution Pictures.