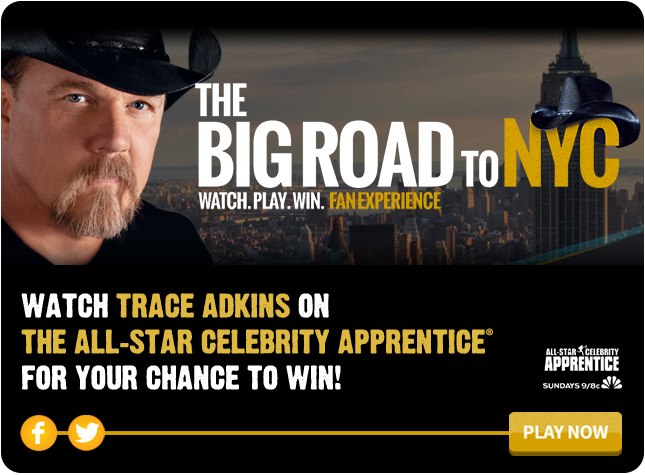 Trace Adkins’ website is now an interactive hub for fans to earn great prizes every week. The Country Star’s site has been dubbed “The Big Road to NYC,” since one grand prize winner will earn a trip to New York City for the live finale of NBC’s All-Star Celebrity Apprentice.

The site launched March 3rd and will continue through the release of Trace’s 11th studio album, Love Will… in the Spring.  Each week, new tasks, new Apprentice commentary from Trace and new “reveals” from his upcoming album will appear, for one week only.

While on the site, fans can complete tasks related to the album, the American Red Cross and All-Star Celebrity Apprentice. Each task earns points towards weekly prizes and two grand prize trips. Fans with the highest points will be recognized weekly on the site as elite members of “Trace’s Team.”

Completed tasks count as entries to win prizes like a pair of Nocona Boots signed by Trace, a year supply of Trace Adkins Hightower’s Smoked Sausage, an iPod, or an autographed Trace Adkins-branded guitar. Grand prizes include a trip to the live finale of All-Star Celebrity Apprentice in New York City (regardless of the outcome) or an all-paid cruise aboard Country Cruising 2014.

“Trace’s music and his efforts to help others have earned the loyalty and respect of so many fans,” said Sloane Cavitt Logue, Director of Digital Marketing at Show Dog-Universal Music. “We designed this site as a fun thank-you by offering access to Trace’s thoughts on the Apprentice, a sneak-peek at new songs and great prizes. We’re also especially proud, as a part of Team Trace, that we can connect people to more information about the American Red Cross.”

Trace Adkins’ 11th studio album, Love Will… will be released this Spring on Show Dog-Universal Music. The collection of sexy grooves, heart-wrenching ballads and up-tempo anthems about the world’s greatest emotion are worthy additions to Adkins’ long list of career hits. Fans can pre-order the album now on TraceAdkins.com.