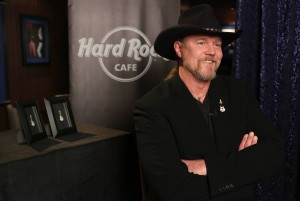 Hard Rock International and the American Red Cross announced a partnership combining their iconic trademarks for Hard Rock’s Red Cross pin in Los Angeles on Wednesday, February 27, 2013. To launch the partnership, country star Trace Adkins,who is a friend of Hard Rock and a Red Cross spokesman, appeared at Hard Rock Cafe Hollywood Blvd to reveal the limited-edition pin that will raise funds and awareness in support of American Red Cross Month this March.

“As a Red Cross spokesperson, I would like to thank Hard Rock for getting involved in creating a cool, and meaningful, accessory that will help raise funds for this esteemed organization,” said Trace Adkins. “The pin serves as a reminder that the work of the American Red Cross is ongoing, far beyond emergency relief and disaster response.”

Trace Adkins’ relationship with the Red Cross began with a personal tragedy. In 2011, a fire claimed the Adkins family’s home while the father of five daughters was on tour. The American Red Cross volunteers were among the first on the scene. The Country star has often stated that until that event, he lacked awareness of the scope of the Red Cross’ efforts. In addition to responding to more than 70,000 disasters each year including home fires, the American Red Cross supplies about 40% of the nation’s blood; teaches skills that save lives; provides international humanitarian aid; and supports military members and their families.

The new limited-edition pin features the globally recognized Red Cross logo embedded in the Hard Rock’s signature guitar. It will be available on hardrock.com, as well as in US cafe, hotel and casino locations, with 15% of the retail price benefiting the American Red Cross. ($12)

“True to our ‘Love all – Serve all’ mantra, Hard Rock is honored to partner with the American Red Cross on this fundraising program and support the organization’s efforts across the U.S. ,” says Vickie Kunkle, vice president of merchandise, Hard Rock International and American Red Cross Mid-Florida Region board member. “The limited-edition 2013 Hard Rock Red Cross pin marks the first in an annual series that will be offered each year during American Red Cross month in March, starting a legacy of support for years to come.”