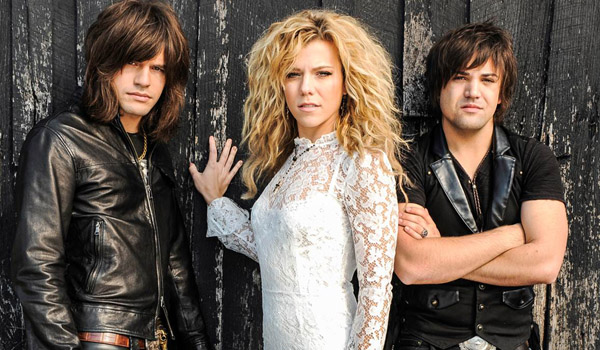 Republic Nashville sibling trio The Band Perry will preview new music from their forthcoming album PIONEER to family, friends and fans in their hometown of Greeneville, TN on Saturday, March 30. The FREE concert and signing – presented by the Greene County Partnership to raise awareness for “Outnumber Hunger” –will take place on North Main Street, beginning at 6:00 p.m. ET. Immediately following the special performance, The Band Perry will sign autographs and meet with their fans. If there is inclement weather, the event will move inside the gymnasium at Hal Henard Elementary School at 425 E Vann Rd in Greeneville, TN and attendees will be accepted on a first come, first served basis.

“Anyone who knows us knows how much we love our hometown. We have been traveling so much the past several years that we wanted to bring our new music and our new show back home to the folks in Greeneville to say how much we appreciate their support, just like we did with our first record. It’s our way of saying ‘thank you,’” says Neil Perry.

“We are working with General Mills this year to ‘Outnumber Hunger’ and we are so appreciative that they are sponsoring our hometown show and giving us the platform to bring our new music home to our friends in Greeneville. We are especially looking forward to spending time with our friends there and meeting our fans,” says Reid Perry.

“Sometimes to know where you are going, you have to know where you have been. Greeneville is our home and is so dear to our hearts. It’s the place we come back to, to feed our souls and rest our heads. It’s where we can truly let our hair down.  What better place to unveil PIONEER than right at home!? We are so proud that the Greene County Partnership is presenting our show,” says Kimberly Perry.

“The Band Perry is the jewel in the crown of our community,” says Tom Ferguson, president and CEO of the Greene County Partnership.  “Not only are Neil, Reid and Kimberly true ambassadors of the warmth and hospitality found in Greeneville and Greene County, they set a standard of professionalism that we feel is unmatched in the musical world.  We’re very proud to be a part of assisting General Mills in bringing ‘our band’ home to launch their new album.”

“We are thrilled The Band Perry is taking on a bigger role with Outnumber Hunger this year as they launch their new album. With their support, we can rally Americans to help the 50 million people across our country who struggle with hunger,” said Cheryl Welch, director, Outnumber Hunger at General Mills.

The lead single “Better Dig Two,” from their forthcoming sophomore release, scored a multi-week #1 at country radio and has been certified platinum for sales of more than one million copies. The family band will reveal the exciting new video for their follow-up single, “DONE.” in a few weeks. The Band Perry is currently nominated for ACM Vocal Group of the Year and will perform on the televised awards show on April 7 in Las Vegas.

Visit thebandperry.com or thefansperry.com  for the latest news and tour dates. Visit OutnumberHunger.com for more information on how to support food banks.