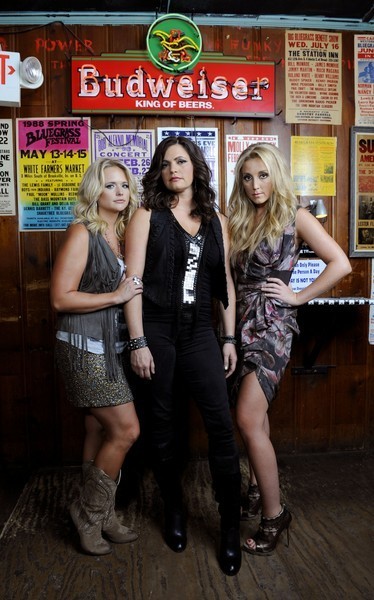 What started as a late night phone call between Miranda Lambert, Ashley Monroe and Angaleena Presley, materialized into the Pistol Annies. The unorthodox, sassy trio, released their debut album in August of 2011, return with their up album, Annie Up, set to release May 7.

“We laid it on the line with Hell On Heels and we wanted to bring it again on this album,” said Miranda. “We put all our musical chips on the table, so we thought ‘Annie Up’ was a good title,” added Ashley.” “The goal of our music is to have people feel like they’re having a conversation with us,” said Miranda. “We never tried to sit down and write a song. When we’re together, we’re always just writing,” said Angaleena. In fact, the trio wrote “Unhappily Married” last June at the CMA Music Fest while in hair and makeup. “We can’t, not write,” added Ashley.

Fans get a taste of the new album with the debut single, “Hush, Hush” which shipped to radio yesterday. “After we came back from the holidays we were talking about how horrible it was,” laughed Miranda as she described the inspiration for the song. “So we took a little bit of truth from each of our family experiences and wrote this song,” said Ashley. “It’s about the truth. The truth is so much easier than lie on top of lie on top of secrets,” said Angaleena. “The truth will set you free.”

Starting NOW, fans can keep up with all of the latest Pistol Annies news at their website, pistolannies.com including information on how to unlock additional music and more!