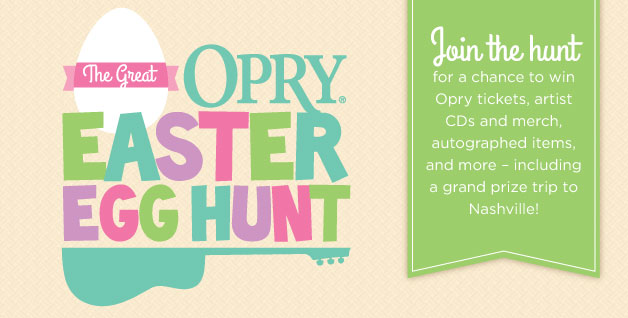 For the second year, the Grand Ole Opry is teaming up with artists, radio stations, attractions, and other partners from across the country for a high-tech Easter Egg Hunt via Twitter this Friday, March 29.  Prize eggs will be hidden around the Opry’s hometown of Nashville as well as in several mystery cities across the U.S., and fans will find clues to the eggs’ hiding spots by following @opry on Twitter throughout the day Friday.

Among the prizes up for grabs from the Opry and participating partners are tickets to see Alabama, Terri Clark, Kacey Musgraves, and more coming up at the Opry; autographed CDs and merchandise from several artists including Trace Adkins, Garth Brooks, Josh Turner, and Carrie Underwood; and more.

Fans will also be able to participate in a Virtual Opry Egg Hunt and enter for a chance to win a grand prize trip to Nashville by searching for virtual eggs throughout opry.com on Friday.