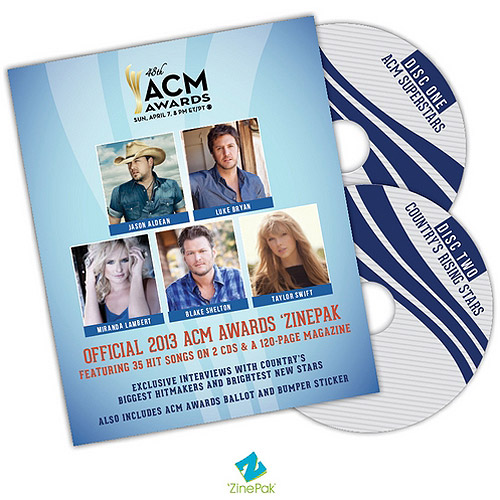 The Academy of Country Music and ‘ZinePak are proud to announce the release of the Official 2013 ACM Awards ‘ZinePak, a limited-edition package spotlighting 2013’s biggest names and brightest new stars.  The collection pairs a 120-page magazine with 35 songs on 2 CDs.

It also includes a ballot with this year’s ACM Awards nominees and an ACM bumper sticker. Leading up to the LIVE broadcast of the 48thAnnual Academy of Country Music Awards on Sunday April 7, 2013 at 8:00 PM live ET/delayed PT  on the CBS Television Network, the ‘ZinePak will be  available at Walmart stores nationwide and Walmart.com. The package sells for $10.

“This year’s ACM ZinePak is just what the fans need to be ready when the ACM Awards air on April 7th,” said Lisa Lee, the Academy’s senior vice president of Creative, PR & Production. “They can learn all about this year’s nominees, plus they can discover some great new artists on the horizon. We’re so thankful to our record label partners for helping us create such a great collection to celebrate the ACM Awards.”

This is the third partnership between the ACM and ‘ZinePak. The previous two compilations (2011 and 2012) both debuted in the Top 20 on the Billboard Top Country Albums chart.

Disc Two includes hits from some of country’s brightest rising stars, including X Factor winner Tate Stevens and The Voice winner Cassadee Pope, along with 16 other artists.

All 35 artists lending songs to the compilation provided exclusive interviews, which can be found in the 120-page magazine accompanying the CDs. The magazine gives fans an inside look at the Academy, including the history behind the organization and the Awards, some of the most decorated artists in its history, and the important social and philanthropic activities happening year-round tied to ACM Lifting Lives.  It also includes interviews with GAC hosts Storme Warren and Suzanne Alexander, both longtime ACM veterans. The package also includes a ballot for fans to choose their picks in each category ahead of the Awards broadcast on April 7, and a collectible bumper sticker.

Production of the collection was overseen by New York-based entertainment company ‘ZinePak. ‘ZinePak co-founder Brittany Hodak said, “We are thrilled to partner with the Academy for the third straight year to create a ‘ZinePak for fans. This year’s package is definitely the best yet, including 35 songs and more than 500 exclusive interview responses from country artists. From what happens when Blake and Luke walk into a bar to the wildest thing they’ve ever seen happen at the award show, country’s superstars held nothing back when they answered the questions for this year’s ‘ZinePak.”

“We are proud to be able to offer this package to fans at the incredible value of $10,” added ‘ZinePak co-founder Kim Kaupe. “We’d like to thank our friends at ConAgra’s Child Hunger Ends Here program; Coors Lite, the official beer of the ACM Awards; and GAC – Great American Country – for their partnership on this project. We’re confident fans will enjoy this year’s package even more than the previous two.”

The track listing for the first disc is:

The track listing for the second disc is:

The package is currently available for pre-sale at Walmart.com, and will be available at Walmart stores nationwide beginning March 26. Production will be limited to fewer than 45,000 copies.

The Academy of Country Music Awards ceremony, which honors country music’s top talent as well as the industry’s hottest emerging artists, is produced for television by dick clark productions and will be broadcast LIVE from the MGM Grand Garden Arena in Las Vegas on Sunday, April 7, 2013 at 8:00 PM live ET/delayed PT on the CBS Television Network.