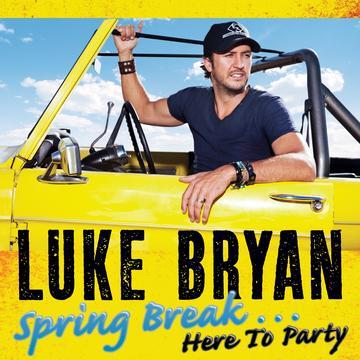 Capitol Records Nashville recording artist and 2013 Academy of Country Music Awards show co-host Luke Bryan will release his next spring break themed album on March 5, 2013, SPRING BREAK…HERE TO PARTY. In celebration of the new CD Luke will perform on The Ellen DeGeneres Show on release date March 5, Jimmy Kimmel Live! on March 6 and on March 14 Luke will make his first appearance on Conan.

CMT is debuting a television special, “Luke Bryan: Spring Break…Here To Party,” about the creation of his spring break concert series and music over the past 5 years. Fans can enjoy footage of Luke onstage and off stage. Go to cmt.com to view schedule of additional air dates.

In additional promotion for the album, Luke will once again play concerts at Spinnaker’s Beach Club in Panama City, set for March 12 and 13. Last year’s shows saw over 40,000 fans flock to the beach each day to see Luke perform. Spring breaking fans can also enjoy a “Dirt Road Diaries Tour” show the following day on March 14 at the Amphitheatre at the Wharf in Orange Beach, Alabama.

Luke will also make appearances on CMT’s Hot 20 Countdown and GAC’s Headline Country in the month of March; check local listings for dates and times. GAC’s Top 20 Countdown will film an episode at Luke’s Orange Beach, Alabama show which will air on Friday, March 22, 8:00 p.m. /ET.

SPRING BREAK…HERE TO PARTY will be available in record stores, and digitally, and will contain many of the songs released on his previous Spring Break EP’s. In addition, Luke has co-written two original songs for the album- “Just A Sip” and “Buzzkill.”

Grab your copy of SPRING BREAK…HERE TO PARTY by clicking HERE.