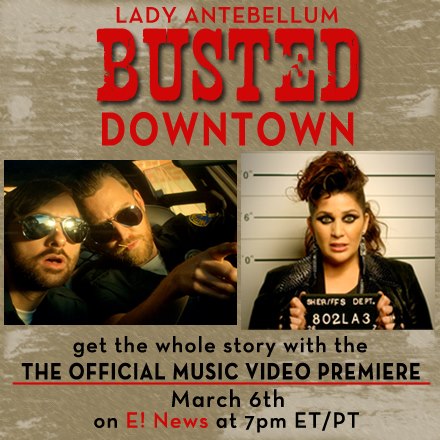 GRAMMY-winning trio Lady Antebellum has teamed up with E! News this week for the debut of the playful music video for their current Top 10 single “Downtown.” Beginning today, E! News will reveal sneak peeks from the shoot before the video makes its world premiere on the show this Wed., March 6 at 7:00 ET/PT.  Catch a sneak peek HERE.  The video will post immediately following the premiere on Eonline.com and be exclusive to E! for 24-hours.

Shot in Los Angeles last month and directed by Peter Zavadil, E!’s own Marc Malkin sits down with the band and takes fans behind the scenes of Lady A’s Hillary Scott and 2 Broke Girls star Beth Behrs’ mischievous night out on the town.

“This is definitely the most fun we’ve ever had shooting a video,” said Scott. “Beth was sweet enough to agree to help out for this video. It’s not often I have a partner in crime to help me stir up a little trouble for Dave and Charles!”

“Downtown” is the lead single off Lady A’s upcoming fourth Capitol Nashville release GOLDEN, out May 7. The track hit big out of the gate, becoming the trio’s highest charting debut on the Country radio charts.

The premiere of Lady Antebellum’s “Downtown” follows a successful series of music video premieres on E! News and EOnline making E! the destination for top-tier musicians and record labels. Artists, such as Madonna, Lady Gaga, Taylor Swift, Maroon 5 and Gym Class Heroes have partnered with the network to showcase their new videos to the world.

For more information on new video and music, visit ladyantebellum.com.