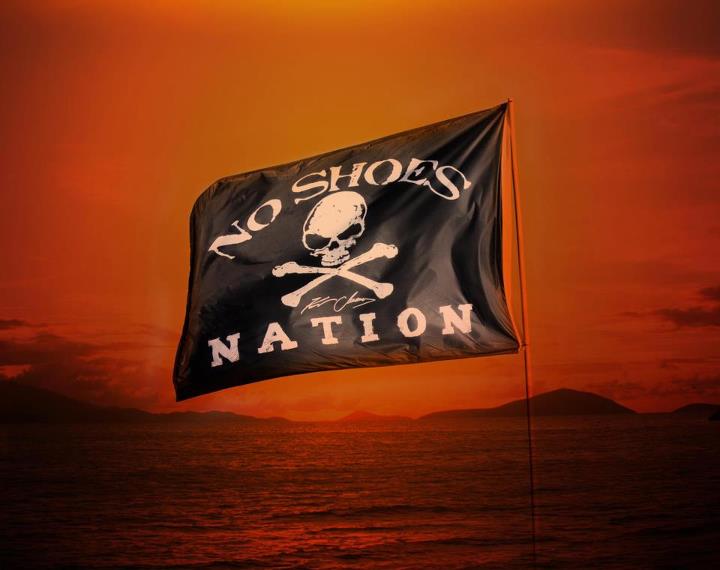 When Kenny Chesney released “Pirate Flag,” the surging anthem of rebellion right where you are, he hit the charts screaming. Marking his 8th Top 25 debut, the song not only had an impact with programmers and USA Today who made it their Song of the Week before it was even released, the fans of the No Shoes Nation responded by buying up not one, not two, but three runs of Chesney’s 2013 flag!

“I love that people are buying these flags and flying them in their dorm rooms, at their cubicle at work, on their cars, as curtains…,” Chesney says with a laugh. “People are posting pictures on Facebook, and sending us Tweets. We’ve even had a couple girls in bikinis, holding the flag up and winking.”

“I think for anybody who wants to rebel against the mundane things in their life, this little flag… which flies right where you are… is a nice reminder of how you really feel that can hang right out in the open. And if you’re not part of the club, nobody has any idea what it means.”

With the second order being airlifted to Nashville to fulfill back orders, a third order being printed in three sizes – and already almost sold out before they’ve come in, the NSN Skull & Crossbones has turned into a talisman for people looking to let their free spirit fly.

“Every country should have their own flag,” says the man who’s sold over a million tickets on each of his last 10 tours, “and it feels like the No Shoes Nation is taking their state of mind literally! I love that… I love the fact that all these people who come out and make us a part of their summer every year take being part of the No Shoes Nation to heart! I can’t wait to see those flags flying this summer, at the tailgates, on the road coming in and no doubt out in the crowd.”

With a car flag that measures 10.5” by 15”, a personal flag that’s 11”x18” with grommets and a boat flag that comes in at 3’x5’, the NSN Pirate Flag can go anywhere you take it. And no matter where you are, people know that you mean business! Three full printings worth, and the tour hasn’t even hit the road, yet.

“Pirate Flag,” #13/14 on Billboard/Country Aircheck Country Singles charts after four weeks, is the lead track from the decidedly introspective Life On A Rock, which arrives April 30. As for those NSN Jolly Rogers, they’re gonna start catching the breeze at Tampa’s Raymond James Stadium March 16th when the No Shoes Nation Tour starts bringing Summer alive for another year.