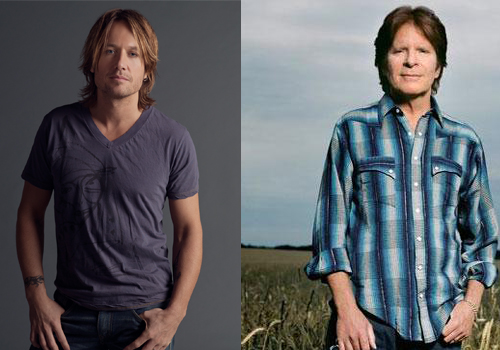 When John Fogerty was approached with the idea to “get a bunch of the people that you really love and do your songs,” his new album ‘Wrote A Song For Everyone’ came to life.

One of the classics on the album, “Almost Saturday Night,” was a song written by John in, “a really dark time for me, and yet I wrote this cheerful song right in the middle of it.”

The song has a great deal of meaning for him, which is why John decided to give country superstar and legend Keith Urban a call to join him on the track for his new album ‘Wrote A Song For Everyone.’ Urban brings a new blast of energy with his guitar, banjo and unique sound. John said Keith, “is an incredible monster musician, probably the greatest musician on this record.”

The respect is mutual for these two musicians. In Keith’s interview below he describes the emotions that took place in the studio while recording “Almost Saturday Night.” He says, “There’s nothing like being in the studio, you’ve got the headphones on, and suddenly there’s John’s voice…That was a real magical moment for me.”

“The two had the “best time doing this song,” and the finished product shows it. Play the video below to step into the studio with John Fogerty and Keith Urban, and watch footage of the behind-the-scenes work that went into the making of the track.