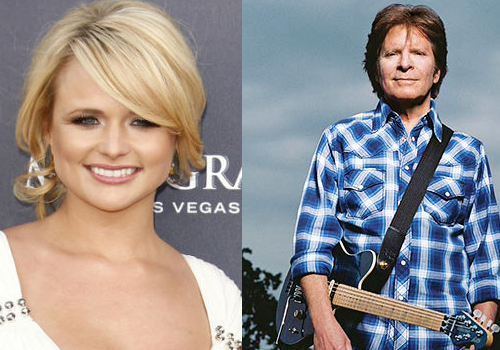 One album, sixteen special guests, two brand new songs and one songwriter: John Fogerty. On his new album Wrote A Song For Everyone, Fogerty produces a masterpiece, drawing from his classic songbook of hits and collaborating with some of the biggest superstars in popular music. Alongside these stellar collaborations, Fogerty has also penned two brand new original songs for the album. 14 songs, 16 special guests, one songwriter, and one amazing album.

One of the special guests includes country superstar Miranda Lambert. John slipped her a note at an event, requesting she lend her voice to the title track of his new album. We have exclusive behind-the-scenes studio footage of Miranda and John recording this song together. Miranda discusses what it was like working with “rock royalty” on a song so near and dear to his heart saying, “no one else can write songs like John Fogerty, much less sing like him.”

Lambert grew up listening to two things: country music and Creedence Clearwater Revival. She considers his music “timeless” and covers a CCR song during every one of her own sets. Now the two artist’s careers have collided and they’re able to do what they both love the most together.

Tom Morello, Rage Against the Machine guitarist, also joins the two of them on this track following Lambert’s suggestion to insert a “face-melting guitar solo!” John originally said, “I thought, ‘I’ll do a solo like Tom Morello.’ That lasted about half a nanosecond.” That’s when they decided to bring in Tom Morello, and the track was born.

You can pre-order the album on iTunes or Amazon prior to the release on May 28th!

Get a glimpse at the work that went into the making of the duet, and hear bits of the track “Wrote A Song For Everyone” for the first time below.