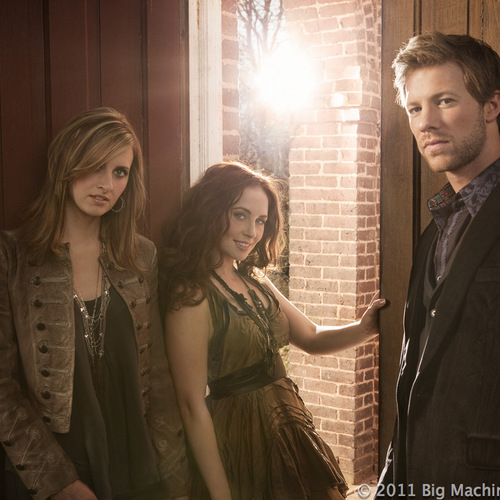 Edens Edge said farewell to a founding member of the group [Hannah Baylock] who left upon her own accord and with much disappointment. They played their final show on February 22, 2013 at The Grand Ole Opry. The Arkansas natives made their sentimental Opry debut on March 5th, 2011.

Dean found the location of their last show to be beautifully ironic as, “The Opry stage is a place that artists begin living the first pages of their journey and many times it is the last place they play before their earthly journey ends and tonight we couldn’t have asked for a better place to open this new chapter for Edens Edge than on such a gracious stage.”

Edens Edge was formed from a pre-existing family band in 2004. Three brave members of that band set their sites on Nashville, TN and arrived to town in 2007. In 2010, Scott Borchetta signed Edens Edge to the most progressive record label in Nashville and alongside the amazing staff at Big Machine they released their first single “Amen” in 2011, and it went Top 20 thanks to country radio. In June 2012, Edens Edge released a self-title album, produced by Mark Bright and Dann Huff that climbed to the Top 5 of Country iTunes. Edens Edge spent the last three years touring arenas with iconic country artists such as Reba McEntire, Brad Paisley, Lady Antebellum and Rascal Flatts. Getting Edens Edge back on the road and performing for fans is Dean’s priority, “We will never be the same as we were before, but we believe that the changes will lead to a more exciting and electrically engaging stage show.”

Edens Edge is writing and recording new music. Cherrill said excitedly, “The new freedom we have in the writing process has injected creativity and life into every lyric. It has allowed us to create songs that are true to the love for traditional sounds that brought us together but we’re also taking some unconventional risks with regard to collaborations, new faces and content. We’re pushing our own boundaries. I can’t wait for our wonderfully loyal fans to hear what we’ve been working away on.”

As Edens Edge goes on 10 years together they have become a part of the fabric of country music in Nashville and look forward to continuing to work toward their dream of becoming Grand Ole Opry members. They will be sharing updates, adventures, exciting news and answer any questions you have on the original Edens Edge social platforms. Twitter: @edensedge | Facebook: facebook.com/EdensEdge

Dean & Cherrill would like to personally thank Scott Borchetta for his belief and support in Edens Edge. They’re forever grateful for the time spent inside the Big Machine family.

Personal message from Dean: “We’re literally living on the “edge” right now, as we regroup, write, and the next chapter of our band is revealed. It’s a crazy but exciting time, and we hope everyone will join us on the journey.”

Personal message from Cherrill: “One of my favorite parts of the past few years, in addition to amazing tours and performing on the Opry stage, was getting to make and meet fans. Feeling supported and loved as you are following your dreams is one of the most amazing gifts. I can’t thank the fans enough, and we can’t wait to get back out there and see them all again.”