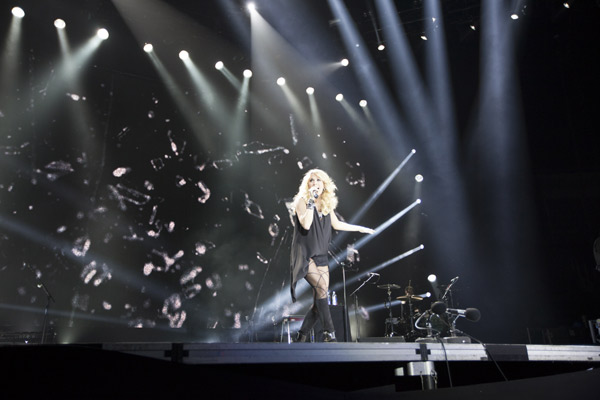 Superstar Carrie Underwood continued to spread country music around the globe by taking her international “Blown Away Tour” across the pond this past week, performing shows and visiting with media in Ireland and the United Kingdom. Her sold-out dates in Dublin and Belfast were not only her debut performances, but also marked her first visit to the countries of Ireland and Northern Ireland. She wrapped up her trip in London by closing the “C2C:Country To Country” Festival at the O2 Arena last night.

At the sold-out Belfast show at Waterfront Hall during St. Patrick’s Day weekend, Carrie invited a couple who happen to be some of her biggest Irish fans onto the stage where the gentleman proposed to his girlfriend of 10 years. As Carrie and the teary audience looked on, his girlfriend said yes to thunderous applause from the enthusiastic crowd.

In addition to the tour and promotional stops, Carrie and her band also met lots of British and Irish fans while visiting some of the local sites including the London Eye, a tour of the Guinness Storehouse in Dublin, a stop at the Titanic Belfast, and the oldest tavern in Belfast, White’s Tavern.