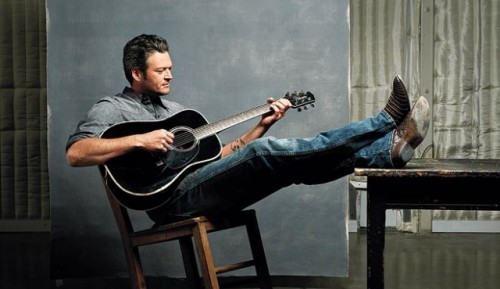 Blake Shelton’s new album, Based On A True Story, which Us Weekly gives 3 ½ of 4 stars, will be available everywhere March 26th. In support of the release, Blake is set to begin a run of media dates throughout the next two weeks, culminating with a performance you will not forget at The 48th Annual Academy of Country Music Awards on April 7 at 8pm ET/PT on CBS.

Blake will begin with a performance on NBC’s The Today Show at 8amET/PT on March 26th and will be performing as part of Clear Channels iHeartRadio LIVE on March 27th at 7:00pmET. He will also make appearances March 28th on ABC’s Live! With Kelly and Michael at 9amET/PT and NBC’s Late Night with Jimmy Fallon at 12:37amET/PT. In addition, Blake will perform at a special private acoustic album release concert in Chicago, IL on March 29th as part of US99.5’s Live Country Series at Joes Bar.

The following week on April 2nd, fans can tune in for more performances from Blake on NBC’s The Tonight Show with Jay Leno at 11:35pmET/PT and on April 3rd, CBS The Talk at 2pmET/1pmPT. Blake wraps up his appearances with his good friend Chelsea Handler to perform on E!’s Chelsea Lately on Wednesday, April 3 at 11pm ET/PT during the talk shows hour-long milestone 1081st episode celebration. This marks their first performance on the show. Blake will additionally appear on Access Hollywood, CBS This Morning, E! News, Entertainment Tonight, Extra, The Dennis Miller Show and Wait, Wait Dont Tell Me! on NPR.