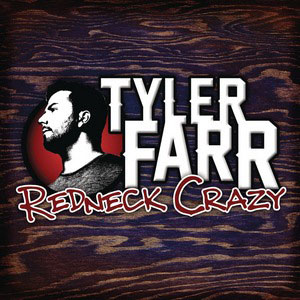 Tyler Farr is gearing up to release his new single, “Redneck Crazy,” to country radio.  The title of the song may have you thinking it’s going to have a party anthem theme, however, you will be pleasantly surprised.  Farr brings both emotion & power to his new release that is going to have country radio, and fans, going crazy for his new song.

Signed with Columbia Nashville, Tyler Farr is following up his previously released singles, “Hot Mess” and “Hello Goodbye,” with “Redneck Crazy.”  Farr conveys several real emotions on this track, such as being angry and getting his p*ssed-off on, making this song very relatable to someone who has been betrayed. With strong lyrics such as, “I didn’t come here to start a fight, but I’m up for anything tonight. You know you broke the wrong heart baby, and drove me redneck crazy,” this song is sure to stand out and make a statement. Farr has a lot to offer to country music.  We are seeing, and hearing, more & more of his talents showcased with each new song he releases.

“Redneck Crazy” is set to impact country radio on February 25, and is going to make for a great addition to radio airwaves. Be sure to call in and request this new single. In addition, Tyler Farr is gearing up to release his debut album this year. Until then grab a copy of his new single “Redneck Crazy” now by clicking HERE.