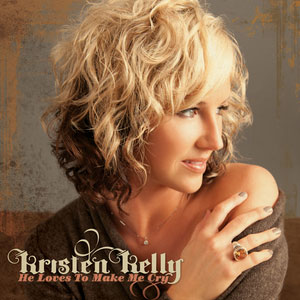 With 30 initial adds, Arista Nashville’s Kristen Kelly makes a powerful showing with her new single, “He Love To Make Me Cry,” as it impacts country radio this week. Co-penned by Kelly, Paul Overstreet and Even Stevens, this sexy and soulful song is the Texas-born singer-songwriter’s follow-up to her debut single, “Ex-Old Man.”

The following are early reviews from music critics with high praise of Kelly’s romantic song:

“Kelly wails it for all it’s worth and stakes her claim as a newcomer to watch. Essential listening.”
MusicRow
Robert K. Oermann

“This is a performance to marvel. It’s not just the power in the Texan’s voice, it’s that she doesn’t sound like another singer in Nashville. You’ll forget what you were doing for three minutes with every listen. These lyrics could steam up an igloo…There’s a fine line between sensual and Cinemax, and Kelly doesn’t cross it. If she can follow up this song with more powerful and original recordings, look for her to be quickly grouped with women named Underwood and McBride in conversations about the top female voices in country music”.
Taste of Country
Billy Dukes

Fans can purchase “He Loves To Make Me Cry” HERE.

Currently on tour with Rascal Flatts, upcoming dates include the following:

Fans should be on the lookout for the music video of Kristen Kelly’s “He Loves To Make Me Cry” which will premiere in the next few weeks.

Kelly’s Arista Nashville debut album is due out later this year. For more information, go to kristenkellymusic.com.