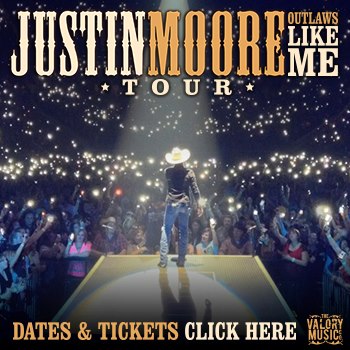 Hit Country singer/songwriter Justin Moore announced today that he will embark on his first headlining tour – Outlaws Like Me. The dates will officially kick off on March 14 in Pikeville, KY with Dustin Lynch and Jon Pardi serving as supporting acts.

Justin, who recently scored his second GOLD-certified album with his self-titled debut, is no stranger to life on the road. Just last year he played to over 1.5 million fans and spent over 200 days on tour. Known for an energetic live show, the Southern stylist has shared the bill with some of Country’s biggest acts – Rascal Flatts, Brad Paisley, Blake Shelton, Miranda Lambert and Eric Church, among others.

“Man, I’m excited to be headlining our first tour. Over the last few years I have been out with some of the best artists in our genre and I have learned so much from each of them,” said Moore. “I’m ready to take everything they have taught me to build our show. It’s going to be a blast I can’t wait!”

Fans can expect some of their favorites, including Moore’s three #1 hits – “Small Town USA,” “If Heaven Wasn’t So Far Away,” and “Til My Last Day” – and a preview of new music for an upcoming album, due out later this year.

** Jon Pardi will not appear at these dates