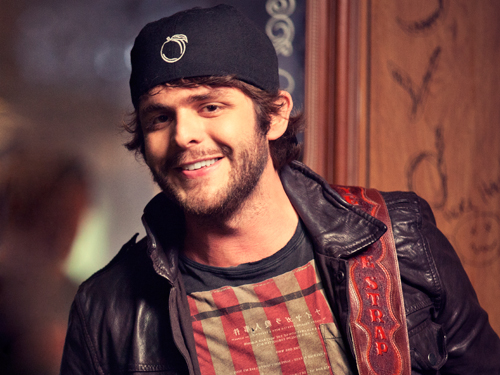 2013 is already of to a great start for The Valory Music Co.’s Thomas Rhett. Thomas kicked off the new year by joining The Locked & Reloaded Tour with Miranda Lambert & Dierks Bentley, and the momentum will continue this summer as he heads out with Jason Aldean on the Night Train Tour. In addition, Rhett will be releasing his debut album this summer which will feature his hit singles, “Something To Do With My Hands” and “Beer With Jesus”.

We caught up with Thomas Rhett and chatted with him about his debut album, time on the Locked & Reloaded Tour, upcoming performance at Boston’s historic Fenway Park, Plans & Goals for 2013, and much more!

CountryMusicRocks (CMR): You’ve been out on the Locked & ReLoaded tour with Dierks & Miranda.  What has it been like for you being out on tour with them & what has been one of your most memorable moments?

Thomas Rhett (TR): It’s been awesome being on tour with both of them. I had never met Dierks before until that tour, and he is so cool, and his band, and was just really fun to hang out with.  I’ve known Miranda for a little while so it was really cool to be out there with two people who kinda became like your best friends after just one weekend of being out there. The most memorable thing, they brought me up on stage during the encore to sing a song that Dierks put on his record called “Bad Angel.”  We did it one night in Baltimore and we all got Ravens jerseys with our last names on the back of them, and we got to out there and sing with them.  It was just a really cool moment. It’s been an awesome tour so far, and it’s going to be kinda sad getting off of it because they are good people.

CMR: Your hit single “Beer With Jesus” has made a significant impact on country radio & with fans. What has it been like for you to watch that song grow & resonate with people on so many different levels?

TR: It’s been a fun one to watch definitely since more people know it now. It’s an amazing song to play live. I knew that going into that song that there were going to be people that were going to love it and there were going to be people that were going to hate it, you know, because when you talk about God and religion in a song, your going to have everybody that’s got their own opinion, kinda like politics. Putting that song out is really cool to kinda get to see people’s reactions, and it was cool getting to hear certain people’s stories of how that song affected them or how it maybe changed their life or how it makes them think of someone that they have lost in the past, or anything like that.  Everytime we play it, after the show is over there is always somebody that comes up and tells me a story of when they heard that song and what it did to them. That’s the reason we wrote it, to try to impact somebody’s life and I really think that’s what it is doing. It’s definitely been a journey and a rollercoaster with that song.

TR: It’s going to be a lot of different things. I’m not really suckered into one category. I love ballads and I love uptempos and I love party rock songs and all that kind of stuff so there is a wide variety of lyrically good songs, and there are song that just make you feel good. My influences range anywhere from The Rolling Stones to Led Zepplin to Merle Haggard, so the writing scheme is kind of all over the place. It’s one of the records that we tried to make that your going to want to listen to from top to bottom, and not just have like 2 or 3 of your favorites that you skip to. Our goal was to try to create a story throughout the record and try to help you listen to it 1 – 11 or 12, and I hope that you are entertained the entire way through.

CMR: Recording a debut album is a one time thing.  Have you been savoring these moments and what has been one of your favorite or most memorable moments recording for your debut album?

TR: I recorded most of the record with a guy named Jay Joyce. The coolest part about it is that he doesn’t really record in a fancy studio. He’s got a studio in the basement of his house. He calls different players over there to come play on the record. It was really cool to watch a guy like Jay do his thing, and me & him worked together on it to come up with cool sounds and come up with fresh ideas. So definitely recording in somebody’s basement was pretty cool for your debut record, and the freedom that the label gave me to kinda do what I wanted to do and cut songs that I wanted to cut. It doesn’t happen a whole lot these days but they trusted my judgement with certain songs, and its just been a really cool process so far. I’m looking forward to getting the record out there though for sure.

CMR: You toured a lot last year between being on the road with Toby Keith & Chris Young, as well as your own tour dates, and this year is already off to a busy start with touring and about to get even busier when you hit the road with Jason Aldean. What has it been like for you trying to find a balance between your touring life, and personal life & personal time with your new wife?

TR: It’s hard. Today (2/10/13) is day 13 that we’ve been on the road and have not been home, and the wife has not been out here.  These runs are definitely a challenge. Through the summer it’s usually Thursday, Friday, Saturday and come home Sunday. Usually when I get home on a Sunday I always take Monday to kinda – I’m not writing, I’m not doing anything with music, I just kinda hang with the wife and see the family and try to play golf if my wife will let me do that & all that kind of stuff [laughs]. You’ve just gotta shut your phone off and shut your work brain off, but it’s impossible in this business because there is always songs to be thinking about, there is always this and that to be thinking about so it’s really hard to shut your brain off but if you can do that. That’s what I’m trying to do lately, just shut my brain off and really just hang out with people and see old friends that I never get to see, but then we’re back out and it’s all work again. But it’s fun work so you definitely got to find that balance, but it can definitely be challenging too.

TR: It’s something that causes me to be really nervous. I never in a million years thought I would playing at Fenway Park or Madison Square Garden or Wrigley Field, or all the stadiums that Jason is doing this year. I’m just blessed and lucky to be a part of it. As far as being the first technical act country-wise to walk out in Fenway is a pretty unreal experience, and that’s something that I’ll be able to tell my kids and grandkids one day. That’s probably the coolest thing that has happened to me up to this point in my career. I’m really looking forward to it.

CMR: Do you think there will be any “1994” collaborations on stage with you & Jason since you co-wrote that song?

TR: It’s a possibility, but I have not gotten any word of it for sure happening.  I know Jason likes to get his openers up on stage so you never know what he has planned for me and Jake to do out there with him, so we’ll see.

CMR: You basically grew up in the music industry with your dad being a singer/songwriter. Has there been a certain piece of advice or motto that your dad has given to you that you have applied to your own career?

TR: When I first started I went out on a radio tour and it was basically just going around to all the big radio stations in the country; sitting down and playing 2 or 3 songs, and kind of give them a taste of who you are and what your single is going to sound like and all that kind of stuff. From the beginning Dad was saying whether your playing for 20 people or 20,000 people you always need to bring it with the same intensity. Never let the number of the crowd affect how you put on a show because sometimes it can be really discouraging. From going to playing Fenway Park to going to playing a really small writer’s room or something, you can kind of turn your brain into alright well I can slack off here. But Dad always taught me to bring the same show every time, and always try to make your show better no matter how many people there is. It’s been a very, very good piece of advice for me to apply to what we’re doing here.

CMR: With 2013 already off to a great start for you, what goals and plans do you have for the year ahead?

TR: I plan to work out a little more. It’s really hard on the road to eat right and make sure your running or at least doing something every day.  I had a hard time with that last year being out here, because you wake up and the last thing you want to do is go put your shoes on & go run. So I definitely want to work out, and I would love to have a Number 1 song this year. I know that’s probably a goal for a lot of people, but I really want a #1 song this year and I’m pretty confident it is going to happen this year. I think a lot of cool things are going to happen this year, as far as being out on the tour with Jason Aldean and Jake [Owen]. I hope to make really good friends with those dudes and become friends for life and write a little bit with Jake & Jason, and keep writing & trying to get cuts on other people’s records, and try to make our show better and try to really, really get a grasp of doing the club circuit, and also entertain large groups of people out on tour with Jason this year. I’ve got a lot of learning to do, but I think this year is going to be really cool.