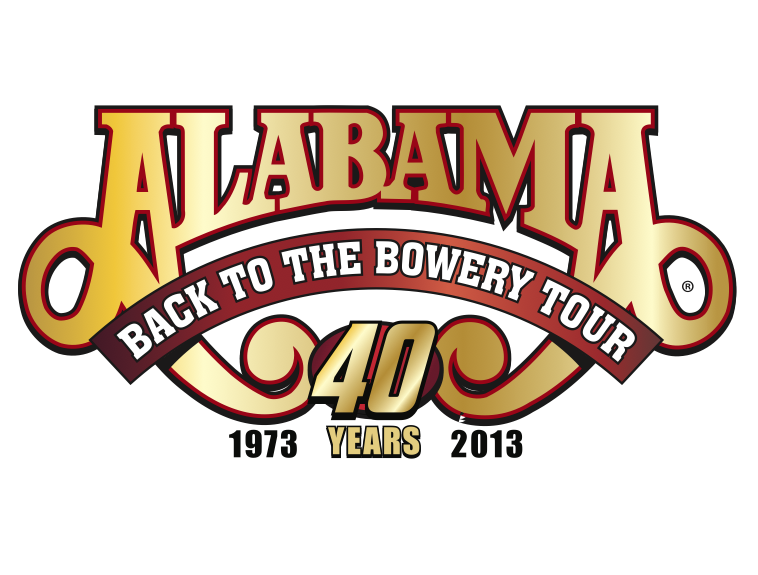 After 40 years of making music, selling millions of records and performing for fans all over the world, country music’s most famed group ALABAMA will embark on a brand new tour to celebrate their very first concert at The Bowery in Myrtle Beach, SC. The Back to the Bowery Tour will launch in South Carolina and run throughout the year, making stops along the way in Alabama, Canada, Connecticut, Georgia, Miami, New York and more.

Additional dates are expected to be announced soon. Tickets will go on sale in select markets beginning Friday, February 15. Pre-sale perks will be offered for fan club members and VIP tickets will also be available for each market.  For more ticket information visit thealabamaband.com.

The Back to the Bowery Tour marks the first time ALABAMA has announced an extensive run since 2002. To commemorate this special occasion, they have chosen to perform in smaller, more intimate rooms in an effort to create special up-close-and-personal memories for their fans.

“I’m so excited to celebrate 40 years since our first show at The Bowery,” says ALABAMA frontman, Randy Owen. “We still love one another, have played music together all these years, and are blessed to still be around. Most importantly, we are ever grateful for the fans, many having been with us since we used to play for tips, so to be able to go back out and play for them will make this a very special year.”

It was 1973 when Randy Owen, Teddy Gentry and Jeff Cook – who all hail from Ft. Payne, Alabama – landed their first ever residency, a summer-long gig playing at The Bowery as the house band. Within just a few years, ALABAMA honed in on their sound, and began to dominate the world of country music with hit after hit, including “If You’re Gonna Play in Texas (You Gotta Have a Fiddle in the Band),” “Song of the South,” “Love in the First Degree” and “Dixieland Delight.”

Their career to date has resulted in 21 Gold ®, Platinum ® and multi-Platinum ® albums, 43 number one singles and more than 73 million records in sales. They have received over 150 industry awards, including eight honors for Entertainer of the Year, two Grammy wins and two People’s Choice Awards, as well as their very own “star” on the Hollywood Walk of Fame. The band received the Academy of Country Music’s Pioneer Award in 2003, was inducted into the Country Music Hall of Fame in 2005, and most recently won the American Country Awards’ “Greatest Hits” Award in 2011.

In addition to the tour and a new album slated for release later this year, ALABAMA will also embark on their very first musical cruise. The Alabama and Friends Festival at Sea – a four-night cruise from Miami to Nassau, Bahamas and Great Stirrup Cay – will set sail on October 24, 2013. For reservations and more information on the cruise visit alabamafestivalatsea.com.

One reply on “Alabama Announces Back To The Bowery Tour”