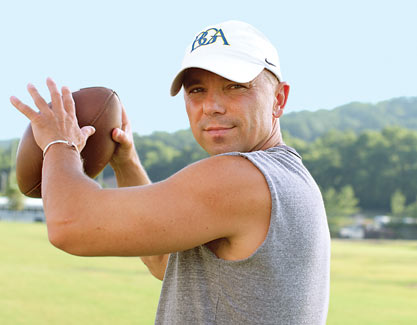 ESPN has announced that “The Color Orange: The Condredge Holloway Story,” produced by Kenny Chesney and Shaun Silva will make its debut as part of the SEC “Storied” series, this Sunday night 1/13 at 10pm ET on ESPNU. The documentary originally aired on ESPN in February 2011. Subsequent airings are slated for Friday 1/18 6pm ET and Friday 1/25 11pm ET.

Chesney wore Holloway’s jersey number when he played high school football and idolized the University of Tennessee quarterback and was thrilled to produce and narrate the documentary which spotlights the life and career of the first African-American starting quarterback in the Southeastern Conference. The film was recognized by the The National Association for Multi-ethnicity in Communications (NAMIC), with a nomination for their annual Vision Awards which recognizes original, multi-platform television programming that depicts the lives, spirit and contributions of people of color and best reflects the diversity of the global viewing audience.

ESPN Films launched the “Storied” documentary series in September 2011, presenting fans the opportunity to explore the rich athletic history of the Southeastern Conference. From extraordinary athletes and coaches to defining games and moments, “Storied” features topics from the SEC’s recent and more distant past.