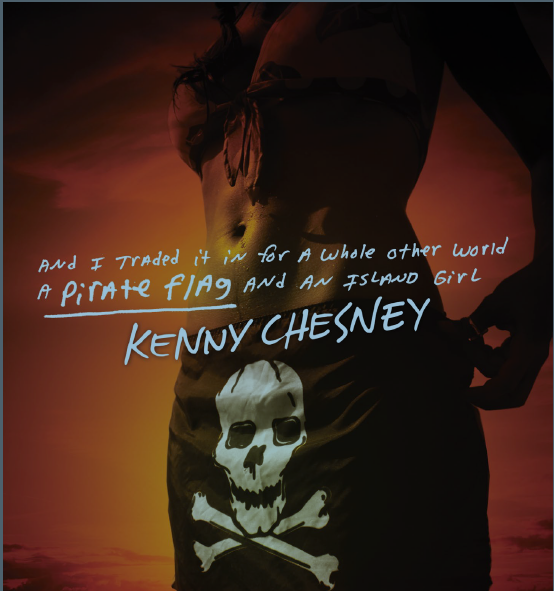 Somewhere on the Water: Maybe it’s the time of the year, the sluggish economy, the boring job or the brutal cold, but sometimes, as members of the No Shoes Nation know, you just have to let your freak flag fly. No one understands better than Kenny Chesney that need to jettison the mundane and push back against the inertia of life.

And so now in the dead of winter, the 4-time Academy of Country Music Entertainer of the Year rolls out an anthem of everyday insurrection and rebellion on one’s own terms. With “Pirate Flag,” written by David Lee Murphy (“Livin’ In Fast Forward,” “Dust on the Bottle”) and new-to-town Ross Cooperman, Chesney offers an anthem for everyman that says, “Where I am may be great, but don’t think I’ll ever  surrender to the 9-to-5.”

“No matter where you are, no matter how you live,” says Chesney, “there is that part of you that yearns to be free, to say, ‘What the hell…’ and just do what you want to do! That’s what this song is all about. The freedom and the idea that you can just say, “Enough,’ even if it’s only in your mind, while you’re watching your boss’s mouth move and are dreaming of whatever gets you off.

“That’s the beauty of this song: You can fly your pirate flag in your head, tack it up behind your computer at work, tattoo it under your skin – and no one has to know. Except you and your friends, the people who really matter!”

The song, which will ship digitally to radio Jan 31, is a thrusting piece of power country that brings tempo to a boil without ever missing a beat. Emblematic of the songwriter/artist’s own will to sail his own course and to rock country his way, “Pirate Flag” also serves as a wake-up call for adventures to come.

“Even me and the band can’t just run off and pitch a tent on some island, as much as we love doing it,” admits the man whose sold last ten tours have done in excess of a million tickets. “I think that’s why when we hit the stage, we hit it so hard – and the fans, those people from the No Shoes Nation, throw it back at us even harder. Because for us, that mutiny against real life happens in the music, happens at the shows, happens when all get together.”

With his No Shoes Nation tour kicking off Mach 16 in Tampa, Fl, Chesney is ready to hoist the flag and shiver some timbers. And with “Pirate Flag,” he’s got just the song to do it. Though nothing like rest of the April 30 album it comes from, it’s the perfect song to launch a summer full of good times, great friends and awesome music.