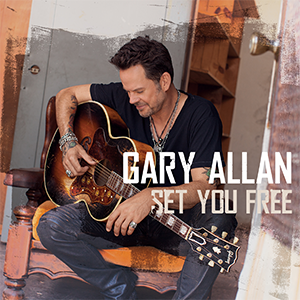 Gary Allan is set to release his highly anticipated ninth studio album, Set You Free, on January 22, 2013.  Set You Free features 12 songs, five of which Gary co-wrote and 7 of which he co-produced, and is a solid album from start to finish.  The new album houses several songs that will make for a great fit on country radio, as well as on the country charts.

“Tough Goodbye” kicks things off and serves as a great introduction to the album. Allan immediately captures listeners with his smooth vocals that we all love to listen to. “Every Storm (Runs Out Of Rain)” is the lead single from the album, and was embraced by fans & country radio upon its release.  Due to the success of the hit single, the release date for Set You Free was moved up.  Gary gets a little rowdy and rocks it on the track “Bones.”  The song is upbeat and one that fans will really get into as they think about who they have a bone to pick with.  “It Ain’t The Whiskey” is a stellar song on the album. Allan delivers a song about someone who is hurting and falling apart piece by piece.  It’s not from the whiskey or the smoking, but from the pain he is enduring from the loss of a love that he can’t forget.

Set You Free conveys several musical elements on the album.  “Drop” gives off the blues/soulful element, while “Sand In My Soul” has a mysterious sound with unique lyrics such as “sand in my soul, beer in my veins.”  “No Worries” delivers a tropical & carefree feeling about having no worries, as long as he is with his love. “You Without Me”, “One More Time” and “Hungover Heart” all showcase Gary’s strong and distinct vocals, coupled with solid music arrangements, making the songs resonate long after they are over. Gary comes full circle with emotions on the album and closes with the optimistic track “Good As New.”  The song serves as a solid and powerful album closer.

Gary Allan delivers a stand-out country album with Set You Free.  CountryMusicRocks Top 3 song picks from the album include: “Every Storm (Runs Out Of Rain), “It Ain’t the Whiskey” and “Sand In My Soul.”

Pick up your copy of Gary Allan’s new album, SET YOU FREE, in stores on Tuesday, January 22, or download on iTunes by clicking HERE.