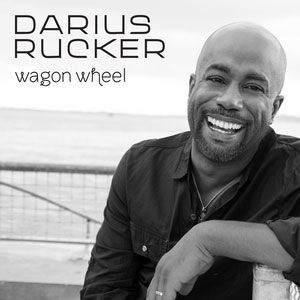 Darius Rucker has just released his new single, “Wagon Wheel,” and it was because of his daughter’s high school talent show that he came up with the idea to record the Old Crow Medicine Show popular sing-along tune.

“We were watching my daughter, and the faculty band gets up. It’s just the faculty from her school, and they play ‘Wagon Wheel.’ And I’m sitting in the audience, and they get to the middle of the chorus, and I turned to my wife, and I go, ‘I’ve got to cut this song,’” recalls Darius. “I’m serious. This all happened in three-and-a-half minutes, four minutes, while they’re playing the song. And so I’m texting [producer] Frank Rogers, ‘Do you know this ‘Wagon Wheel’ song?’ He’s like, ‘Yeah. It’s by Old Crow Medicine Show.’ He said, ‘A lot of people have cut it.’ I said, ‘I don’t care! [laughs] I’m cutting it!’”

The song, which is based on a portion of the song “Rock Me Mama” written by Bob Dylan and later finished by Ketch Secor of Old Crow Medicine Show, has been recorded by numerous artists including Little Feat, Jeremy McComb and Mumford & Sons…and can be heard in just about every club in America.

You may recall Darius made a surprise appearance with Old Crow Medicine Show at the Grand Ole Opry last July for a special rendition of the song.