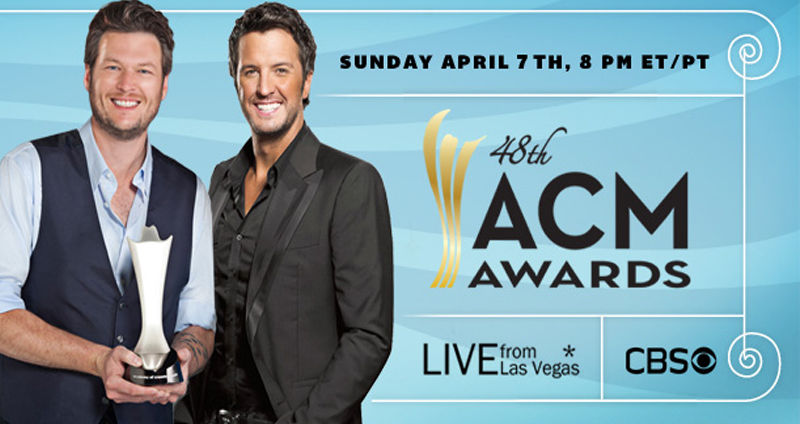 Brad Paisley will host the 3rd Annual ACM Fan Jam, taking place at The Orleans Arena Sunday, April 7th, 2013. This live remote location gives country music lovers the ultimate fan-pass to be a part of the 48th Annual Academy of Country Music Awards!  Throughout the three-hour Awards telecast from MGM Grand, there will be live ACM Fan Jam performances, via remote from The Orleans Arena, by Brad Paisley and other top-tier music acts.  The ACM Fan Jam continues after the Awards telecast ends, with performances by Brad Paisley and friends. Details and other participating talent will be announced soon but fans can tweet to unlock a special message from Brad, delivered to them immediately after they tweet, by visiting the ACM Social Splash page at www.ACMsocialsplash.com.

As they have done for the past four years, the Academy and dick clark productions will once again tape an all-star concert TV special Monday, April 8, 2013 at 7:00 PM at the MGM Grand Garden Arena, featuring today’s top country acts and more.  Talent announcements are forthcoming.  The special will air later on CBS and ticket proceeds will benefit ACM Lifting Lives.

Country music fans “unlocked” this press release in the first-ever ACM “Tweet to Unlock” promotion, wherein fans were invited to send a minimum of 25,000 tweets before the date and host information would be released to the public.  Fans were alerted to the opportunity on Friday, and reached the 25,000 threshold in just less than 4 days.

The Academy will announce its full schedule of The Week Vegas Goes Country™ events in the coming weeks, which will include The ACM Experience, to be held April 5-7, 2013 at The Orleans Hotel and Casino.  In its sophomore year, this free, family-friendly open-to-the-public country music lifestyle event will once again feature LIVE country music performances, interactive games and dance competitions, the ACM Expo a shopper’s paradise and country marketplace, and much, much more to be announced.