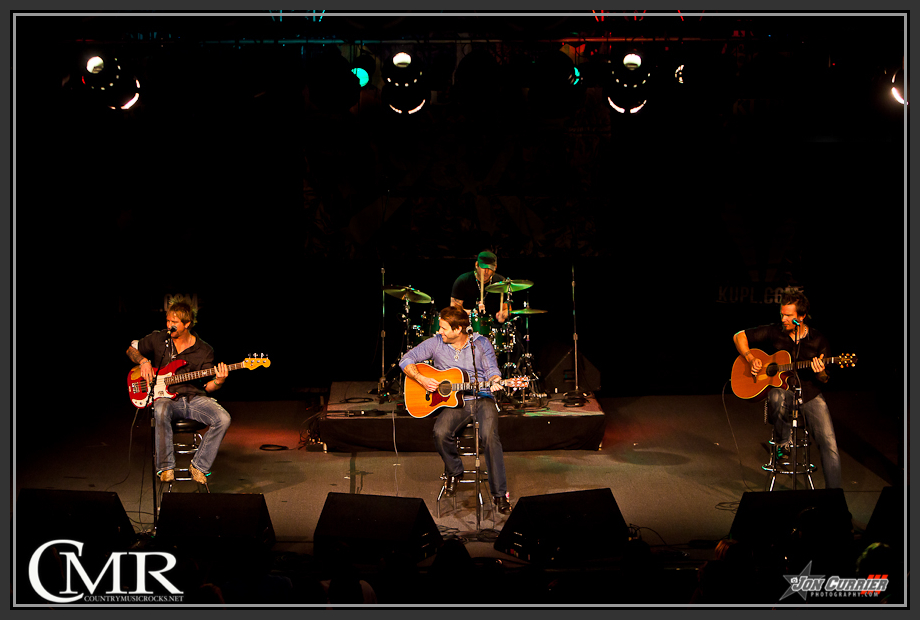 Parmalee made their way to the west coast and was featured in KUPL‘s Holiday Santa Jam Concert. Opening the show with “I’ll Bring The Music,” Parmalee instantly set the tone that a fun evening was ahead. A lasting impression was made as Parmalee showcased their songs such as “I Wanna Take Y’all Home,” “Day Drinkin’,” “Already Calling You Mine,” and many more. Matt, Scott, Barry and Josh introduced a more serious and diverse side to themselves as they delivered “Another Day Gone” and “Carolina.”  Prior to singing “Carolina,”  Matt indicated that it would be their next single to impact country radio in early 2013.  After listening to them perform the song, they certainly have another hit on their hands with “Carolina.”

Parmalee’s live performance was fantastic, and full of energy from start to finish. They interacted with the audience and it was well reciprocated. The songs performed were of quality, and provided a great indication that a solid debut country album is on the way. Parmalee is one to keep your eyes on and ears tuned-in to.  They are Ones to Watch in 2013.

Check out some photos of Parmalee rockin’ the stage by clicking HERE.  Be sure to add Parmalee to your Concerts To See List. To see if they are playing at an area near you, click HERE.

Parmalee is gearing up to head into the studio and record their debut country album. Until then, grab your copy of “Musta Had A Good Time” on iTunes now by clicking HERE. Keep up with Parmalee on their Official Website. They are also very active on their social media sites, so be sure to Like them on Facebook and Follow them on Twitter.

5 replies on “Parmalee Provides Fans With A Good Time”