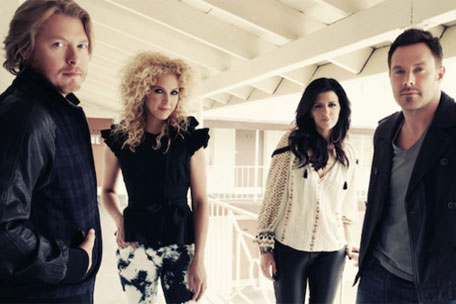 Country foursome Little Big Town will wrap up 2012 with a performance of their #1 hit single “Pontoon” on the LIVE PART 1 SEASON FINALE of THE X FACTOR tomorrow at 8/7 C on FOX. They will be performing with finalist Tate Stevens.

The band has had a banner year with the release of their critically-acclaimed fifth studio album Tornado, which was recently certified gold by the RIAA, and features the CMA “Single of the Year – Pontoon” as well as current single “Tornado.” Little Big Town also walked away with the CMA “Vocal Group of the Year” trophy and most recently the ACA for “Music Video of the Year: Group or Collaboration-Pontoon.” The group will vie for “Best Country Duo/Group Performance-Pontoon” at the 55th Annual GRAMMY Awards this February.

Little Big Town will launch The Tornado Tour January 31, 2012 in Murray, KY and will hit over 25 cities nationwide with special guests Kacey Musgraves and David Nail.