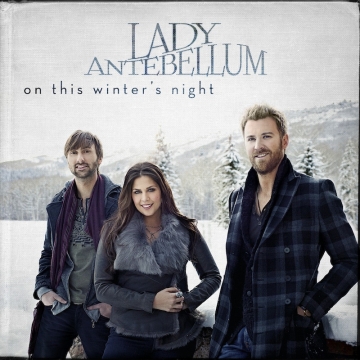 GRAMMY winning country trio Lady Antebellum received an early Christmas gift when the RIAA issued GOLD certification of ON THIS WINTER’S NIGHT, their first full length holiday album. Released in October, the disc’s title track was penned by the group and is accompanied by 11 additional holiday classics.

Critics have praised both the album’s title track as well as the band’s arrangements of the classics, USA Today described the album as “a new twist on holiday favorites” and the Associated Press promises fans “there’s not a rendition on the album that disappoints.”

“’On This Winter’s Night’ is full of Christmas classics — and deserves to become one in its own right.” – Associated Press

“The title track here is the best offering, sweet without too much sugar and with a careful arrangement that eases into a subtle backbeat.” – Chicago Sun-Times

“…a new take on the 1965 Burl Ives classic ‘Holly Jolly Christmas,’ from Lady Antebellum. This one would make Doris Day and Bing Crosby proud as the treatment is a romantic 1950’s style big band production that swings and swoons, and is pretty darn refreshing, by just being traditional. It’s a great version of a classic.” – All Access

“Winner of seven Grammys, the vocal group brings cheery sincerity to their original title track and snowy standards like ‘A Holly Jolly Christmas,’ ‘The First Noel’ and Donny Hathaway’s soulful‘This Christmas.’ As always, lead singers Hillary Scott and Charles Kelley are supported by vocalist Dave Haywood, who joins on mandolin. Best of all, crafty orchestrations feed the group’s hickory-smoked conviction rather than slicking
it up.”  – Wall Street Journal

“Some of the best holiday songs evoke melancholy as well as all that stuff about decking of halls and letting of snow and by turning Mariah Carey’s rollicking ride into a wistful ballad steered by Hillary Scott’s sweet vocals, Lady A provides some welcome dimension.” – Atlanta Journal Constitution

“Though it’s a new release, ‘On This Winter’s Night’ will take you through decades of Christmases.” – The Virginian-Pilot

Fans can also get in the holiday spirit with the trio for the CMA Country Christmas special on Dec. 20 at 8:00P CT on ABC and the 29th Annual Disney Parks Christmas Day Parade airing Dec. 25 at 9:00A CT on ABC. For a full list of upcoming appearances, visit www.ladyantebellum.com.