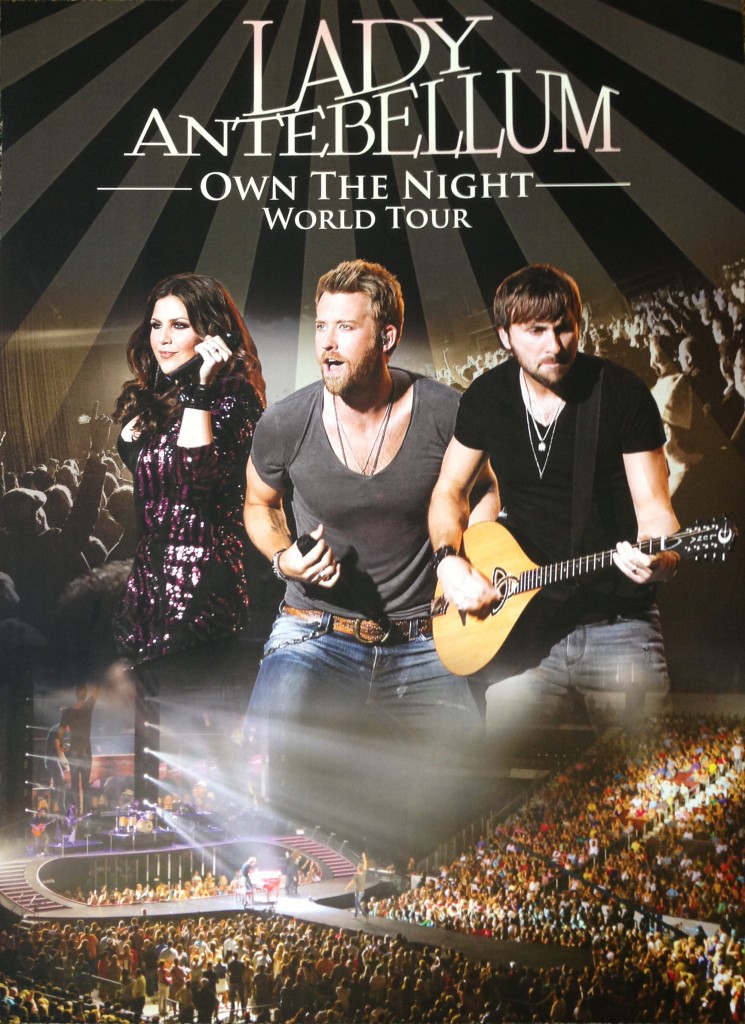 Eagle Rock Entertainment, the world’s leader in visual music, is proud to announce the DVD, Blu-ray, and Digital Video release of Lady Antebellum Own The Night World Tour, a spectacular concert by country music’s reigning CMA and ACM Vocal Group Of The Year. Filmed in June of 2012, the concert features the Nashville-based band—Hillary Scott, Charles Kelley and Dave Haywood—complete with documentary footage of the tour and seven additional bonus tracks.

Lady Antebellum’s headlining tour traveled across the US, Canada, Europe and Australia, where the Grammy winning trio was welcomed by over one million fans in 11 countries on three continents. Lady A sold out shows in top markets including Los Angeles, Chicago, two nights in New York City, Toronto, London, three nights at Sydney’s Opera House and even had a chance to open a sold out show at London’s Hard Rock Calling for one of their idols Bruce Springsteen.

The concept for the stage was simply sketched out on a paper plate while out on tour the summer of 2011 and evolved into one of the trio’s proudest accomplishments as a band.

Before taking the show overseas, Lady Antebellum celebrated the final weekend of the North American leg by documenting the show from Little Rock, AR.

The 90-minute performance includes #1 hits “I Run To You,” “We Owned The Night,” “American Honey,” “Just A Kiss,” “Our Kind of Love,” and, of course, the greatest selling country single of all time, “Need You Now.” Among the performances are documentary excerpts depicting their lives as songwriters, musicians, and close friends.

According to Variety, “Lady Antebellum certainly pushes all the right buttons in concert: backdrops dominated by shooting stars and bucolic scenery, a careful placement of the hits–but there’s more to their appeal than just that. Their palette is broader, more forcefully colored than most of their peers, and the soulfulness that results is unmistakable.”

Lady Antebellum is currently nominated for “Vocal Group of the Year” and “Album of the Year” for OWN THE NIGHT at the 46th Annual CMA Awards. OWN THE NIGHT debuted at the No. one position on Billboard’s Top 200 and has spawned two No. one hits “We Owned The Night” and “Just A Kiss.” The trio has sold over 11 million albums across the globe, scored seven GRAMMY Awards and tallied six No. one hits.