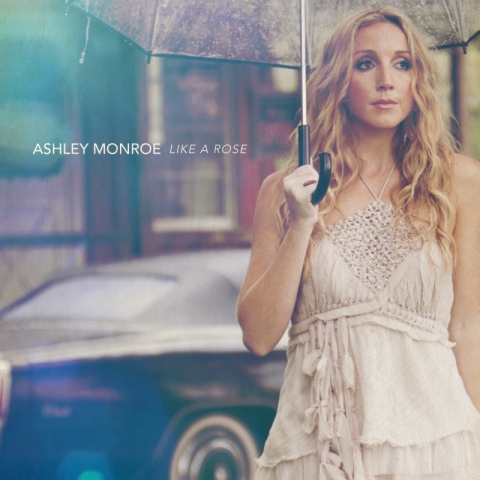 Ashley Monroe, a member of the critically acclaimed trio Pistol Annies, will release her first Warner Nashville solo album, Like A Rose, to digital outlets on December 18, 2012.  The physical CD drops at retail January 22, 2013.

Most folks, as soon as they hear Ashley Monroe, instantly recognize one thing: she’s the real deal. Her songs resonate so profoundly because they reflect the experiences of an artist who, although she is just 26, has already seen both the best and worst that life has to offer.

Like a Rose has been a long time coming. Monroe has been creating music for more than half of her life—attracting along the way kudos from such music world giants as Dolly Parton, Guy Clark, Vince Gill and Jack White. Her new, full-length album release serves both to fill in the back-story and impart to us who she is today. At times her songs are dead serious, at others utterly hilarious, but always Monroe is an original with a compelling story to share.

Monroe spent her childhood in Knoxville, Tennessee, where she immersed herself in all varieties of music ranging from country—she’s not-too-distantly related to members of the legendary Carter Family—to rock, pop, rap and even opera. When she was 11, Monroe won a talent contest singing “I Want To Be a Cowboy’s Sweetheart” and two years later her father gave Ashley her first guitar. She developed a passion for writing songs, discovering that she could easily communicate her thoughts and sentiments through a six-string and her dynamic, exceptional voice.

Shortly thereafter tragedy struck, upending the young girl’s world. Monroe’s father was diagnosed with cancer and died when Ashley was 13. The young girl immersed herself in music. Monroe and her mother moved to Nashville so that Ashley could pursue her dream. It didn’t take long to find believers. Within a year Monroe had signed a song publishing deal, secured a recording contract and released a single, “Satisfied,” a sizable hit that put her on the map. Then another roadblock: Her record label merged with a larger company, and declined to release her already-recorded album. Although the Satisfied album found a home on iTunes, Ashley, only 20, was, in a sense, back where she’d started.

She didn’t let that stop her though, and with a lot of hard work and determination, Monroe kept honing her craft and putting herself in front of anyone who would listen. Her fandom grew steadily and fellow artists began to notice.

In 2008, Ashley cut a highly praised EP with singer-songwriter Trent Dabbs and a few years later, at the invitation of Jack White, she sang background vocals on an album he was producing by the iconic country-rockabilly singer Wanda Jackson. And just to prove how versatile she is, Monroe also contributed vocals to the track “Bruises” on the 2012 album California 37 by the rock band Train.

But one of the most rewarding artistic adventures for Ashley to date has been the Pistol Annies, a trio she co-formed in 2011 with her friend Miranda Lambert, whose chart-topping hit “Heart Like Mine” Ashley co-penned, and newcomer Angaleena Presley.  Pistol Annies have provided Monroe with yet another outlet for her music. Their album, Hell on Heels, garnered rave reviews. The All Music Guide called the trio “a remarkably democratic supergroup” while veteran music critic Robert Christgau gave the album an A grade, citing its “expertly executed tunes.”

Despite her list of previous accomplishments, everything she’s done so far feels like it’s been pointing the way toward Like a Rose. With songs that run the gamut from feel-good to controversial to contemplative, the album, produced by country music titan Vince Gill, offers the full range of Ashley Monroe’s songwriting and performing skills. To maintain the honesty of Ashley’s songs, Gill and the singer chose to record the album the way most of the greatest albums ever were made: sans gimmickry. “We just got the band in a circle and started playing the songs,” Ashley says, “and once we felt like we had a feel for it, I’d do my vocal live—I never went back in to do a second vocal. Everyone put everything we had into the songs. There was a buzz in the room. We all had fun—it felt like a big old family, the way records used to be made.”

Some of the songs were newly written for the album; others date back several years and felt right to revisit. The semi-autobiographical title track, one of the uncontestable highlights of the set, was co-written about six years ago with another totem of the American song-crafting community, Texan legend Guy Clark.

One song that is bound to raise some eyebrows refers to the same favored flower of the title tune, but in a much different sense: “Weed Instead of Roses” tells of a woman’s desire to get a gift she actually desires from her beau, not just something that smells good.

“You Got Me,” co-written by Monroe and Karen Fairchild. Says Ashley, “It’s about an addiction to something—one thing or another, whether you’re stuck in a bad relationship or alcohol or whatever it is—and you try to hide it and fight it but you’re kind of saying, ‘Alright, you got me.’

On a more light-hearted note is “Monroe Suede,” based on “a slick character that tries to get away all the time.” Another is the self-explanatory “You Ain’t Dolly (And You Ain’t Porter),” a duet featuring CMA Entertainer of the Year Blake Shelton. “Morning After” confronts that uneasy feeling that often follows a too-good time and “She’s Driving Me Out Of Your Mind,” written with Jon Randall Stewart, comes straight from one of Ashley’s many journals. “Two Weeks Late” was suggested by singer-songwriter Shane McAnally, who co-wrote it with Monroe. “He came in and said, ‘I heard this phrase at the ATM: I’m a dollar short and two weeks late.’ That was another one that just fell out. I grabbed the guitar and we started writing it up.

“Used,” another standout, is an update of a song that appeared on Monroe’s Satisfied album. “It came to me when I was about 17 and my manager at the time had just bought me this old 1950s Gibson guitar,” she says. It came into my mind that things are worth more used, and I thought about my mom, who had lost my dad when she was 38. I was thinking, she had two kids, she’s been through a lot, and, bless her heart, it’s all gonna be worth it. Vince and I worked up this new version, which made it fresh for me.”

And fresh it all is. Like a Rose avoids the trappings of too much contemporary music by sticking to the basics: memorable songs, incredible musicians, a superb voice, all of it captured honestly and without frills. As the saying goes, sometimes we need to stop and smell the roses. Take a whiff of Like a Rose and you’ll find it smells pretty darn sweet.