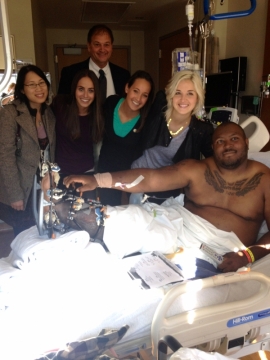 rpmentertainment’s Maggie Rose has a lot to be thankful for this holiday season with her break out single, “I Ain’t Your Mama” reaching into the Top 30 on radio charts.  To show her thanks and give back, Rose spent much of her Thanksgiving Day visiting with wounded warriors and their families at Walter Reed National Military Medical Center in Bethesda, Maryland.

Growing up only a few miles from the facility, Rose often visits when she is in the area. Rose explains, “Every time I go home, I always make it a point to visit our wounded heroes. I am always touched by their strength and amazing attitudes. I could not think of a better place to spend my Thanksgiving.”

Joining Rose on her visit was Lieutenant General Patricia Horoho, the Surgeon General of the United States Army. Together they served lunch to the wounded warriors and their families, visited with troops in the in-patient wards and spent time with the children of warriors who are recovering from severe injuries in the facility.

Walter Reed is the first destination in the continental United States for caring for the wounded, ill and injured from global conflicts.  Most of the troops at Walter Reed have suffered serious injuries from the conflicts in Iraq and Afghanistan.