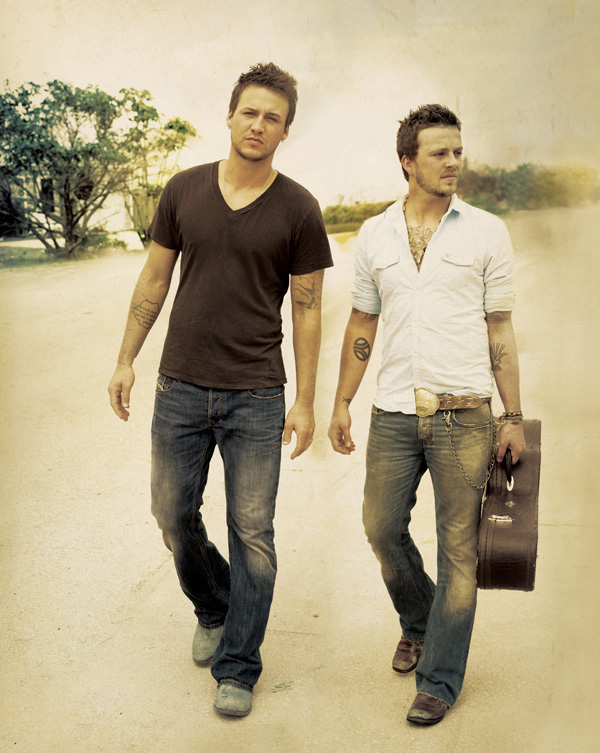 RCA Nashville duo LOVE AND THEFT (Eric Gunderson and Stephen Barker Liles) is picking up steam as “Runnin’ Out of Air” becomes their second single from their self-titled album.  The new single impacts country radio today and promises to follow their Gold-certified #1 hit, “Angel Eyes,” to the top of the charts.  Recently nominated for two CMA Awards, the duo is now nominated for an American Country Award.

“Runnin’ Out of Air” describes the breathtaking, heart pounding intoxication of being near the one you desire…and knowing that it’s as bad as it is good.  It has been described by some industry insiders as a country hit flavored by The Eagles and Maroon 5.

“The difference between ‘country newcomer’ and ‘country star’ can be one irresistible single, and ‘Runnin’ Out of Air’ is that song for Love and Theft,” predicts Taste of Country.  Early raves for the song continue with MusicRow promising a track “with rhythm to spare” and Roughstock cheering “some of the best lyrics to be found on modern country radio.”

Penned by Matt Jenkins, Shane McAnally, and Josh Osborne, “Runnin’ Out of Air” is a song that the duo’s Eric Gunderson recalls as a must-have on first listen.  “I think the first time we heard that, we all were just like, ‘Well, we have to cut that!  That’s awesome!’  It doesn’t sound like anything else that you would hear on a record or the radio right now.  It’s got an old-school feel, but it also has a cool modern thing to it.”

A behind-the-scenes look at the steamy upcoming music video for “Runnin’ Out of Air” is now online HERE.

Hot on the heels of their first two CMA Awards nominations, the duo is currently among the nominees for Music Video of the Year: Group or Collaboration (for “Angel Eyes”) at the upcoming American Country Awards.  Daily fan voting is underway now at TheACAs.com, with this year’s show airing December 10 on FOX.

After spending the summer on tour with headliner Brad Paisley, look for Love and Theft on the road now on CMT ON TOUR JAKE OWEN: THE SUMMER NEVER ENDS 2012.  For all of the duo’s upcoming appearances, visit the tour page of LoveandTheft.com.