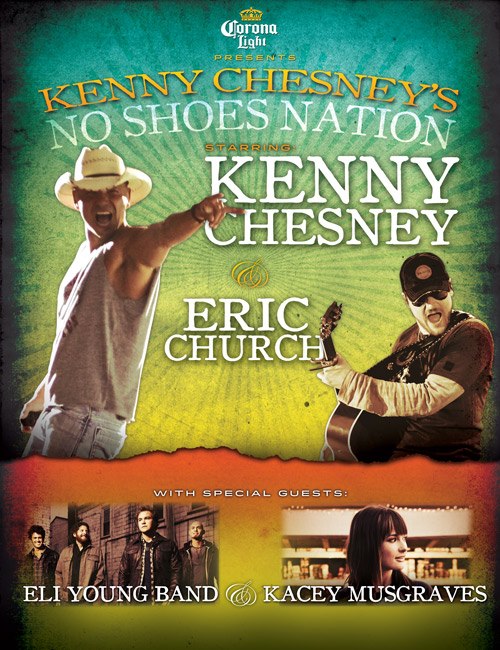 Kenny Chesney, who’s played a country-world record 85 stadium shows in his career, makes it to over 100 with today’s announcement of 17 stadium dates on his ‘No Shoes Nation’ Tour, which starts Saturday, March 16 at Raymond James Stadium in Tampa, Florida. More ‘No Shoes Nation’ tour dates will be announced in the coming months.

“I believe what we’ve created on the road is something special,” says Chesney, “the fans, myself, the band, the crew. But it’s really the fans who have given us a wonderful, unique life. What we’ve all built together is the ‘No Shoes Nation.’ There is no better name for this tour.”

‘No Shoes Nation’ marks 20 years of touring for Chesney, who Billboard declares is “The biggest ticket seller in country music and among the elite touring artists in the world,” and comes on the heels of his wildly successful 2012 ‘Brothers of the Sun’ Tour, which blew away more than 1.1 million fans across the country – his 10th consecutive tour to hit that ticket sale milestone.

Kenny Chesney is once again teaming up with CID Entertainment to offer very special VIP packages for the 2013 tour.  Guests will choose from either Sandbar or Premium Reserved seating and have access to the pre-game tailgate party featuring a buffet of Kenny’s favorite food, drinks and music.  New to this year’s program is an exclusive VIP only entrance and exit for the Sandbar as well as new gift items including a Kenny Chesney “Coach’s Hoodie”, an exclusive stadium seat cushion and more.  Travel packages including hotel accommodations and shuttle transportation will also be available for each date (visit cidentertainment.com/kennychesney for more information).