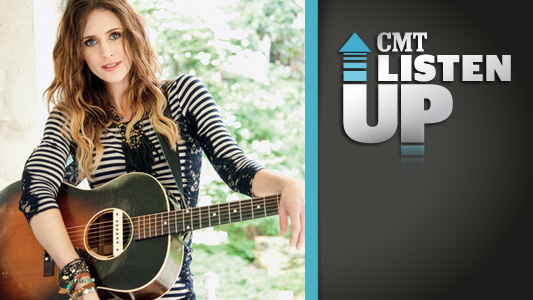 CMT chose one of EMI Nashville’s brightest new acts, Kelleigh Bannen, as the featured LISTEN UP artist this month. Fans can visit listenup.cmt.com for exclusive performances from the recent Capitol Street Party filmed in downtown Nashville, including “Sorry on the Rocks,” “Rose Colored Glasses,” “I Wore Green,” “Oh My My” and “Be A Man.”

Bannen will be featured at CMT.com all month long as the LISTEN UP artist, with new performances, photo galleries, interviews and more. Check out CMT, CMT.com, CMT Mobile and CMT Radio for more exclusive content. The franchise launched in 2011, and showcases country acts on the verge of breaking out.

The EMI Nashville newcomer is a Nashville native who always dreamed of becoming an artist.  After graduating from college in Virginia, Bannen made her way back to her hometown, where she began to write and craft her sound.  It was while on the “90in90” tour, in which Kelleigh played 90 gigs in 90 days to benefit the Butler Center for research, that she connected with legendary country producer Paul Worley (Lady Antebellum, Martina McBride).  In the past year, Kelleigh has been hard at work in the studio with Paul Worley and Jerry Smith recording her debut album, and supporting her debut single “Sorry On The Rocks,” which is at country radio and iTunes now. She shared the stage with Luke Bryan and former LISTEN UP artist, Jon Pardi, at this year’s Capitol Street Party where she belted out her single, “Sorry on the Rocks.”